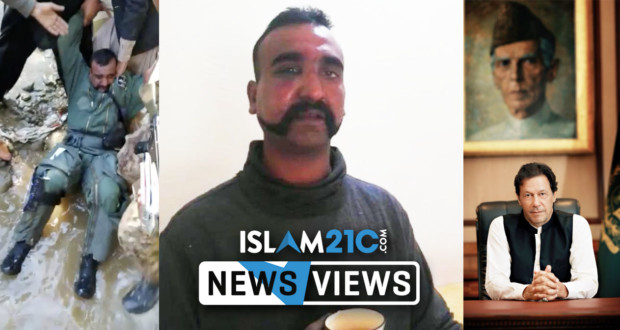 Pakistan shot down two fighter jets belonging to the Indian air force military yesterday in what is being labelled the biggest armed escalation between the two nuclear-armed states since 1971.

Major General Asif Ghafoor of Pakistan said that the Indian air force had violated the Line of Control, the border that separates Indian and Pakistan administered Kashmir, there was engagement between the two air forces and that as a result two Indian fighter jets were shot down, with one plane crashing in Pakistan and the other in India.

Ghafoor said that the targeting of the six locations in Indian-administered Kashmir was a demonstration of Pakistan’s ability to respond to Indian aggression. “[The] sole purpose was to demonstrate our right, will and capability for self-defence,” a statement from Pakistan’s foreign office said. “We have no intention of escalation but are fully prepared to do so if forced into that paradigm.” [1]

Speaking to a news conference Ghafoor said that “this was not a retaliation in a true sense, but to say Pakistan has capability; we can do it, but we want to be responsible, we don’t want an escalation, we don’t want a war.” [1]

According to the Pakistani military two Indian air force pilots were taken into custody with one being hospitalised. Raveesh Kumar, the spokesperson for India’s foreign ministry had confirmed that two pilots were missing and that the Indian government were investigating the incidents. “In this engagement, we have unfortunately lost one Mig-21. The pilot is missing in action. Pakistan has claimed that he is in their custody,” [1] Kumar said in a news conference.

Pakistan’s prime minister Imran Khan made a televised address calling for dialogue and caution and reminded India of the possession of nuclear weapons by the two south Asian states. “History tells us that wars are full of miscalculation. My question is that given the weapons we have can we afford miscalculation?” Khan said, adding that “we should sit down and talk”.[2]

The Pakistani Information Ministry released videos that show a captured Indian air force pilot identified as Indian Air Force Wing Commander Abhinandan Varthaman on the ground surrounded by angry Pakistani civilians trying to hit him, with Pakistani soldiers trying to protect him. In a separate video, Abhinandan is being being questioned by the military in which he affirms that he is being treated well by his Pakistani counterparts.[3]

“The officers of the Pakistani army have looked after me very well, they are thorough gentlemen” Abhinandan said, adding “the tea is fantastic”. “This is what I expect my army to behave as and I am very impressed by the Pakistani army,” he added.

"I would like to put this on record & I would not change my statement if I go back to my country. The officers of the Pakistan Army have looked after me very well. They are thorough gentlemen." – Indian Air Force Wing Commander Abhinandan Varthaman. pic.twitter.com/LChAd9pDZk

Another video released by the military shows an aircraft above the hills in Pakistan being shot down, with fiery wreckage plummeting to the ground.

Pakistan has shut off its airspace to all commercial flights and India has closed six airports following the engagements near the border with Pakistan.

Following the downing of the two fighter jets, India reportedly launched a mortar attack into Pakistan that killed six civilians and injured many others.[4]

On Thursday morning the Pakistan Information Ministry announced that Imran Khan has decided to release the captured Indian pilot as a “peace gesture”, issuing the following tweet: