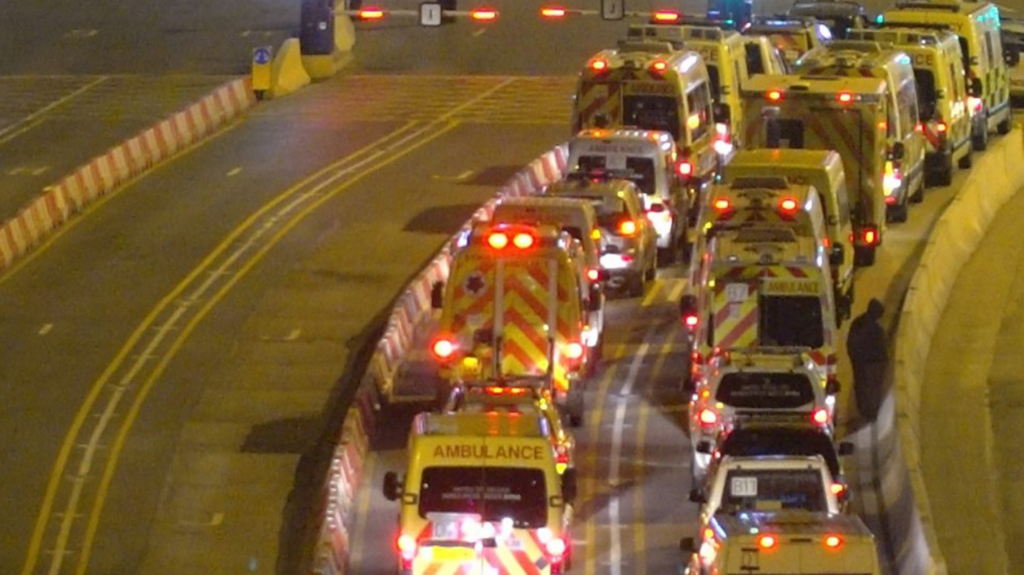 Humanitarian aid workers have spoken of their frustration at being subjected to repeated stops, detentions and police visits as they take part in what is being dubbed “the world’s longest ambulance convoy”.

Volunteers for Unity Convoy, a coalition of charities from across the UK and as far afield as Malaysia, are on their way to Bulgaria where their motorcade of 100 ambulances will be handed over to partners that will take them across Turkey and into battle-torn Syria.

The convoy, which took off from London on Monday, comes on the back of a two-month fundraising effort by UK-based charities including Human Aid, Hand in Hand for Syria and Anaya Aid as well as the Malaysia-based Malaysian Life Line for Syria. The coalition of charities has seen £500,000 raised through events including school no-uniform days and sponsored mountain climbs and marathons.

‘They [police] were warning us to be careful, but we’re not even going to Syria’

But volunteers have told MEE that counter-terrorism police have attempted to thwart their efforts to help Syrians who have been beset by a war that has seen over 470,000 killed according to the Syrian Centre for Policy Research and left 11.5 million people in urgent need of medical care according to the World Health Organisation.

Naz Faruki, a volunteer ambulance driver on the convoy, said that he was visited by two officers from Counter Terrorism Command (SO15) on Saturday.

He told MEE that the officers warned him against going into Syria despite the convoy declaring that it only plans to go as far as Bulgaria.

“They were warning us to be careful, but we’re not even going to Syria,” Faruki complained.

A flyer left by the officers and which was seen by MEE was headed in large caps “Travel Warning: For Travel to Syria and Iraq”.

The flyer said: “You are strongly advised not to travel to Syria and parts of Iraq. Anyone who does travel for whatever reason, is putting themselves in considerable danger.”

The flyer also mentioned that “charity law and laws against terrorism, bribery and corruption” would also “apply to those who deliver humanitarian aid directly”.

Faruki said that though he “remained calm” throughout, the visit “was not very nice” and that “I want to go more now,” referring to joining the convoy.

Other volunteers have taken to social media to accuse authorities of discrimination.

One volunteer who goes by the name Faysal Ahmed claimed to be part of a group stopped and detained for hours under a stop-and-search provision called Schedule 7 while crossing through the port of Dover as the convoy left for mainland Europe on Monday.

Schedule 7 is a provision of the Terrorism Act that permits counter-terrorism police to detain travellers for up to six hours and does not afford them the right to remain silent. According to human rights group Liberty, it “can be exercised without the need for any grounds of suspecting the person has any involvement in terrorism – or any other criminal activity” and is “invariably used in discriminatory fashion, with stops based on stereotype rather than genuine suspicion”.

Isa, another volunteer who told MEE that he was also a part of the group that was stopped, said that his detention while crossing through Dover was the second time he had been detained while carrying out work as part of the convoy. Both men were eventually released without charge.

He told MEE that on his way through Dover to pick up ambulances in France in March, he was forced to hand over his phone, laptop, computer passwords and a DNA sample before being locked in a cell for several hours.

“They even have an arrow on the wall for the direction of prayer, and so I prayed. When I went for questioning they said ‘we saw you praying’,” he said.

He said officers then questioned him on his religious and political outlook.

“They asked me which mosque do you go? Where do you pray? What do you think of Abu Bakr al-Baghdadi?” he told MEE. “I was so vexed,” he said. “No rights, no nothing.”

Volunteers from Malaysia were also detained and interrogated for “seven hours” under Schedule 7 when they arrived in London on Saturday.

Mohamed Muaz Mohamed Ruslan, who headed the delegation of 20 Malaysians who flew into Heathrow to join the convoy, said that while the group was detained, British police eventually let them go.

“When we explained our mission clearly and showed them [police officers] all the relevant documents, they released us,” he told the Singapore daily the Straits Times.

“God willing we will not give up because this is just our first challenge and obstacle in carrying out this mission.”

Muslim charities under the spotlight

As the war in Syria has dragged on, UK charity regulator the Charity Commission has taken steps to stem the flow of aid convoys to Syria over fears they may be abused for non-charitable purposes.

The commission claimed in 2014 that a “suspected British suicide bomber in Syria had travelled there as part of a humanitarian convoy”.

.@StephenBubb says that an 'overzealous' regulatory approach to Muslim charities is harming the fight against terror http://t.co/iSS3zRNJTo

In a statement to MEE the regulator said: “The commission’s position is clear in that it does not support the use of aid convoys as an effective or safe way to deliver aid and has issued regulatory alerts advising charities organising or participating in convoys of the various risks involved and that they will be subject to additional regulatory scrutiny by the commission.”

Alim Shams, spokesperson for the Unity Convoy, said that while it is true “there have been a small number of people who have abused convoys for other purposes,” volunteers for Unity Convoy have had to go through a rigorous screening process where their social media accounts are checked and references contacted, and that “anyone who has a criminal conviction for anything terrorism-related is not allowed to come on the convoy”.

“As long as it’s legal we’ll still be doing it,” he added.

Responding to concerns raised by authorities about smaller charities raising money for Syria, Shams said Unity Convoy was a “grassroots project” with the aim of “creating more of a humanitarian community than online or traditional giving”.

“There is a physical side and there is a psychological side to the war as well. When people in Syria see children in [the] UK raising money for them on a no-uniform day, it makes a big difference.”

Unity Convoy told MEE they have allowed for an additional 48 hours for potential stops and detentions. They hope to reach Bulgaria by Friday before handing over the ambulances and medical equipment to partner charities and flying back to London.

The ambulances will go on to health directorates in the hardest hit areas of the country, including Idlib province where a gas attack – suspected to have been carried out by the Syrian government – left scores dead earlier this month.

Neither Counter Terrorism Command or Kent Police have responded to MEE’s requests for comment at the time of writing.