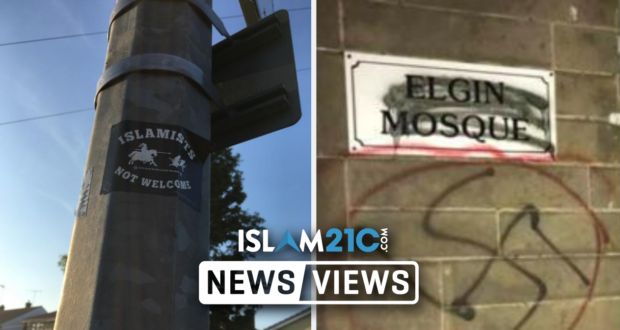 Police have launched investigations after Islamophobic messages were written on the walls of Elgin Mosque in Scotland and Islamophobic posters were put up in a town in Essex.

Police are investigating an anti-Muslim hate crime in which Islamophobic posters were put on lamp posts in a town in Essex, England, that depicted crusaders chasing burka-clad Muslim women carrying AK-47s, with the caption “Islamists not welcome”. [1]

A spokeswoman for Essex police said to the Southend Standard newspaper:

“We are aware of stickers placed in various locations around Rayleigh displaying messages including ‘Islamists not welcome’. We are keen to speak to those responsible for them to discuss their intent. We are treating this as a hate incident.” [1]

The symbols displayed on the posters represent the pan-European White Nationalist group Generation Identity and warned Muslims to “stay back or we will kick you back”. Initially, police did not treat the posters as a hate crime, however, after being contacted by local newspapers, there was a reversal in their decision.

Ahmad Khwaja, a community leader in Essex, told the paper that it is “both worrying and disappointing that anti-Islamic posters have been appearing. This Islamophobia is fuelled by ignorance and it is likely that the people posting them have had little or no contact with any Muslim people in their own lives”. [1]

In a similar incident that took place in Scotland, police are investigating an Islamophobic hate crime after racist and anti-Muslim comments were found sprayed across the walls of Britain’s north-most mosque on Monday night.

The hate crime took place at the Elgin Islamic Centre in north Scotland at 11:00pm, in which both the swastika symbol and other racist and vulgar comments were sprayed on the walls. Scottish police have described the incident as “completely unacceptable”. [2]

Lansana Bangura, chairman of the mosque, said to the BBC:

He also added that “we are worried but at the same time, you know, you expect things like that to happen, but I hope will not happen very often”. [2]

Bangura said, reassuringly, that such acts do not break the bond Scottish Muslims have built with their neighbours and that they have received support and backing from the non-Muslim community. According to police, a white male aged between 30 and 40 with short brown hair was seen in the area at the time. They are now searching for him as part of the investigation and have appealed to the public for information.

“Crimes of this nature are completely unacceptable. There is absolutely no place for it in our communities and a number of inquiries are ongoing to establish who is responsible,” said Detective Inspector Martin MacDougall.[2] The inspector also reassured the Muslim community that they are in regular contact with the mosque and that police patrols in and around the area will be increased whilst the investigation proceeds.

“I appeal to anyone with information about this incident to contact police as soon as possible, particularly anyone who was in the area last night and saw any suspicious activity or people. Thank you to those who have assisted with our inquiries already,” MacDougall added. [2]

In the last three years, there has been a sharp rise in Islamophobia and anti-Muslim hate crime in the UK, with 2017 having a record number of attacks against Muslims, with four anti-Muslim crimes per day on average in London alone. [3] Increases in Islamophobia has been described as due to a number of factors, including Brexit and the proliferation of far-right groups who manipulate people’s misconceptions on immigration and faith.

These latest attacks come amidst the governing Conservative party’s rejection of an all-party parliamentary group’s definition of Islamophobia, accepted by all other mainstream parties. [4]

2019-05-22
Muhammad Mussa
Previous: The real reason the Conservatives reject the APPG Islamophobia definition
Next: What are the European parliamentary elections and what do they mean?