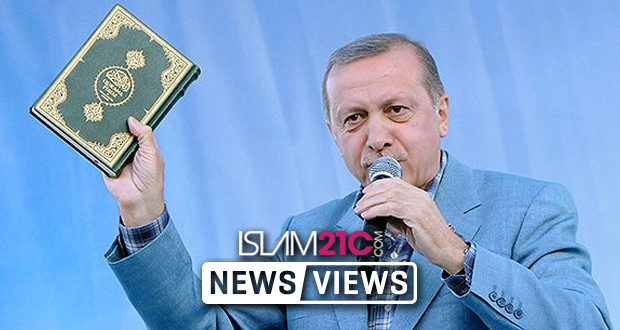 President Erdogan slams those trying to “question the Prophetic Sunnah”

Turkish President Recep Tayyip Erdoğan has staunchly rejected attempts by certain individuals of “questioning the noble Sunnah”, or opening it to debate and controversy. His remarks were made in a speech delivered by the Turkish president on Saturday at the opening of the International Civilizations Forum, organised by Ibn Khaldun University in Istanbul, which concludes on Sunday.

In the address, President Erdogan stated:

“Some have recently tried to make the purified Sunnah a controversial subject. Stirring up controversy in our country is a source of great sadness for us.”

“Some are trying to attribute false accusations to Islam by means of terrorist organisations, and these attempts are so numerous that we do not find opportunity to refute them… being a religious scholar does not give one the authority to stir up controversy in the Sunnah of our beloved Prophet (sala Allahu ‘alayhi wasalam)… Provoking such debates corrupts the entirety of a generation, and no one has given them the right to corrupt this generation, nor is it possible for them to enter the world of politics from this door. If they attempt to do so, the price will be too high for them to bear.”

President Erdogan stressed that the roots of Islamic civilisation, established by the Sunnah of the Prophet Mohammad (sala Allahu ‘ayahi wasalam), is inseparably sourced from the Holy Qur’an and the purified Sunnah, thus it is erroneous to question their validity.[1]

These remarks closely coincide with the Royal Decree issued by the King of Saudi Arabia, King Salman bin Abdul Aziz Al Saud, on October 18th that seeks to establish “the King Salman Complex”, an “unprecedented initiative” according to the Saudi Ministry of Culture of Information. The complex seeks to study Hadith “with the purpose of eliminating fake and extremist texts and any texts that contradict the teachings of Islam.”[2]

Critics have questioned why such ‘vetting’ of an established and followed Prophetic legacy and teachings for over 1400 years is needed, and whether such manipulation of Islam by some ambiguous standard of ‘extremism’ comes as a requisite for a cosy relationship with the US Trump government.

2017-10-23
+Editor
Previous: The Fiqh of Socialising
Next: Black History Did NOT Start With Slavery