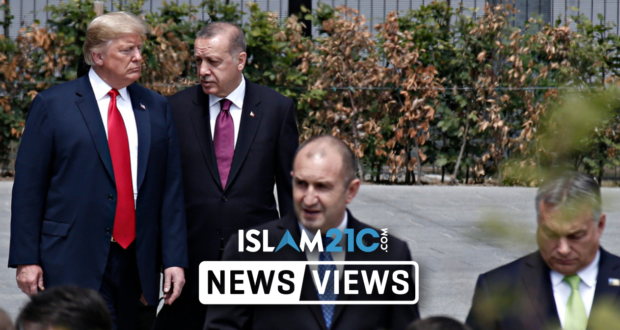 Donald Trump has done it again. With his rude, obnoxious, and inconsiderate personality, Trump has written a “third-grade reading level” letter addressed to Turkish President Recep Tayyip Erdogan, who, unsurprisingly, threw it in the bin.[1]

The letter, dated 9th October, was directed to Erdogan after US troops were pulled out of Syria. In the letter, Trump – the so-called ‘leader of the free world’ – wrote to Erdogan:

The letter also included a threat by Trump of destroying the Turkish economy and reminding Erdogan that he would not want to be responsible for slaughtering thousands of people.

Read the transcript of the full letter below.

I have worked hard to solve some of your problems. Don’t let the world down. You can make a great deal. General Mazloum is willing to negotiate with you, and he is willing to make concessions that they would never have made in the past. I am confidentially enclosing a copy of his letter to me, just received.

I will call you later.

Erdogan, whose critics have called him an “an autocratic leader intolerant of dissent,” [2] is said to have been infuriated, with a source close to him saying:

“President Erdogan received the letter, thoroughly rejected it and put it in the bin.”

The opinionated criticism of “autocracy” is despite the fact that President Erdogan’s AK Party have won the six most recent legislative elections consecutively.

During a press conference, the Turkish President slammed the letter, saying he will take the “necessary steps”.

“The letter was not in line with diplomatic and political courtesy. We will not forget this lack of respect. This is not a priority for us. But when the time comes we would like it to be known that we will take the necessary steps.” [3]

The collection of threats and puerile banter in the letter enraged Erdogan, with his staff saying he “thoroughly rejected” it and later threw it into the bin before the Syrian operation was launched the same day.

Mark Lowen, the BBC’s Turkey Correspondent, tweeted that the letter from Trump was the final straw for Erdogan before making his decision.

#Turkey President's office confirms to @bbcturkce that when President #Erdogan received #Trump's letter, he "thoroughly rejected it, threw it in the bin" and launched the #Syria operation the same day. His mind was already made up to move in; letter was reportedly the final straw pic.twitter.com/pHaiyF5skG

“The clearest answer to this letter is the one on 9 October at 16:00. This answer is the Operation Peace Spring.” [4]