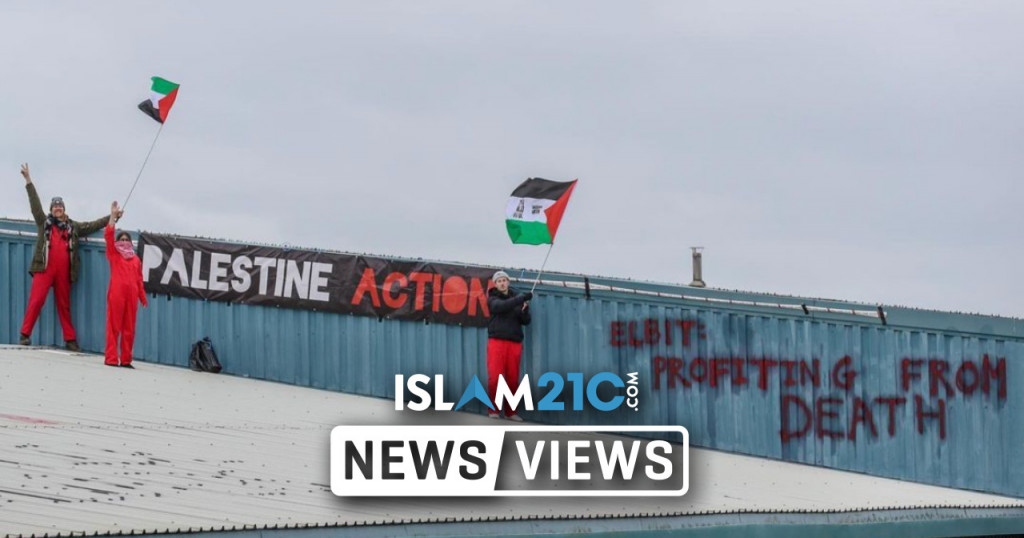 Pro-Palestinian activists and protestors have occupied an Israeli-owned weapons manufacturing plant in the city of Leicester after having entered and shut down the facility last week.

“Palestine Action have occupied Elbit’s factory, UAV Tactical Systems in Leicester and chained the gates shut, disrupting Elbit’s production of arms and military technology. Activists have taken direct action in response to Elbit’s funelling of arms to the Israeli Occupation Force, which is using them to commit war crimes in Gaza” [1] the group said in a statement.

“This action occurs during ongoing and abhorrent violence by the Israeli state in Gaza and the occupied territories, which has killed over 200, including 61 children, and wounded over 1500 in Gaza alone. With the IDF targeting civilian areas, healthcare premises and key infrastructure, the war crimes being committed rely on technology produced at Elbit sites across the UK” [1] it added.

Members of the group seized control of the factory in the early hours of the morning, locking the factory gates, scaling the building’s roofs, and preventing access to the plant by workers and stopping the production of arms. Palestine Action has said its members are determined to remain at the site and prevent its owners from resuming business.

It is the first time the group has targeted an Israeli-owned weapons manufacturing facility. The plant produces Hermes drones that have been used extensively by occupation forces in occupied Palestinian territories. The Watchkeeper drone, which is also used by the Israeli forces, is also manufactured at the facility and is used by host other countries, including the UK.

“Over the past week, Elbit’s lethal sites have benefitted from round-the-clock police protection in the wake of escalating Israeli aggression in Gaza and the occupied territories. Elbit are evidently aware of the thousands of people who have seen the horrific events of the last week and who recognise Elbit’s abhorrent role in these war crimes.” [1].

On 25 May, just days after occupying the Elbit factory in Leicester, Palestine Action proceeded to shut down a second Israeli arms factory in the Midlands. On Tuesday morning, members of the group entered Elbit’s ‘Elite KL’ site in Tamworth, scaling the facility’s walls and disrupting operations at the plant. The facility produces military technology and hardware for Israeli tanks, such as the Merkava and other military vehicles.

Activists occupied the roofs of the Tamworth factory and sprayed red paint over its walls as a symbol of blood shed by the company’s weaponry. The activists’ actions have forced the site to shut down, the second occurrence of its kind in just a week. These events have significantly affected Elbit’s operations in producing and selling weapons of war and murder to the occupation forces in Palestine.

“The collective power and solidarity of people in Britain continues to grow in their opposition to the British state’s and police’s complicity in protecting Israel’s largest arms manufacturer that profits from war crimes, ethnic cleansing and murder globally. For the sake of the protection of life and Human Rights, direct-action against Elbit Systems is a moral duty. Palestine Action will not stop until we shut Elbit down for good.” [2].

“Over the course of the last ten months, Palestine Action has achieved one of the longest and most sustained direct-action campaigns against an arms company this country has seen. Through rooftop and ground occupations, blocking site entrances and property damage, these actions have cost Elbit millions of pounds in losses.” [2].

Last week, an Egyptian-brokered cease-fire between the Hamas government in Palestine and Israeli occupation forces came into effect, putting an end to 11 days of indiscriminate and intense bombing raids of the occupied and besieged Gaza Strip.

Up to 280 Palestinians have been killed, including 69 children and 40 women, and 1,910 others injured in Israeli attacks on the Gaza Strip, according to the Palestinian Health Ministry. Israeli occupation forces also levelled a number of residential and commercial tower blocks, including the offices of Al Jazeera and the Associated Press, actions that constitute a war crime.