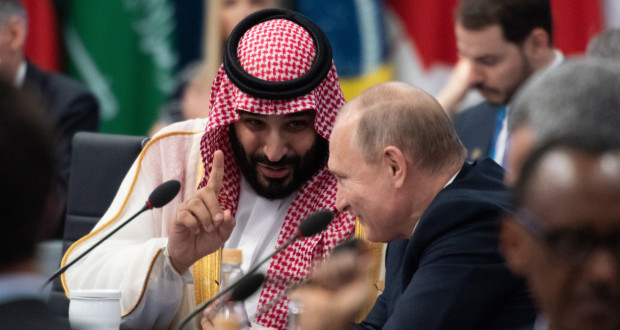 A past top counterterrorism specialist and long-time adviser to the former crown prince of Saudi Arabia Muhammad bin Nayef has recently made some shocking revelations. He warned that Mohammad bin Salman (MBS), the incumbent heir to the Saudi throne, previously bragged that he could murder King Abdullah with the use of a Russian-made poison ring. Dr. Saad al-Jabri, the Canada-exiled and former second in command intelligence official of the Saudi Kingdom made the explosive claim on the Sunday night 60 Minutes programme, which was broadcast by the US television network CBS News. [1]

Al-Jabri, a former major general, minister of state, and confidante to deposed crown prince Muhammad bin Nayef made waves after sharing this damaging information with the popular primetime news programme. More specifically, he revealed that the authoritarian and hot-headed MBS stated the following in a 2014 exchange with then Saudi interior minister Muhammad bin Nayef:

“I want to assassinate King Abdullah. I get a poison ring from Russia. It’s enough for me just to shake hand(s) with him and he will be done.” [1]

The former intelligence official al-Jabri has been living in exile in Canada since June 2017, after the ousting of Muhammad bin Nayef as crown prince. In his interview, al-Jabri further added that Saudi intelligence officials took the MBS threat seriously and that the House of Saud dealt with the matter internally.

In what could easily form part of a sensationalist plot plucked straight out of an action movie, al-Jabri also said in the interview that he knows the location of two taped copies of the alleged 2014 meeting with MBS and Muhammad bin Nayef. Whether there is truth in what the former intelligence chief has said is another matter, given that he did not disclose any explicit evidence during the discussion with CBS correspondent Scott Pelley.

In 2015, King Abdullah of Saudi Arabia died at the age of 90, after suffering from multiple stretches of ill health in his later years. The late king had ruled the oil-rich Gulf state since 2005, when he officially assumed power after the death of his half-brother and eldest son of the Sudairi Seven, Fahd bin Abdulaziz. Upon Abdullah’s death, another half-brother assumed the throne, namely Salman bin Abdulaziz. In the following years, King Salman and Crown Prince Mohammad bin Salman have detained and removed from succession various family members, with the ejections even dramatically including Salman’s full brother Ahmed bin Abdulaziz and Ahmed’s son Nayef. [2]

The Saudi embassy in Washington D.C. has responded to the damning allegations. It released a comprehensive statement, in which it accused Saad Al-Jabri of being “a discredited former government official with a long history of fabricating and creating distractions to hide the financial crimes he committed”. [3]

The embassy’s statement further sought to undermine al-Jabri’s claims by portraying the former counterterrorism expert as a thief who stole “billions of dollars, to furnish a lavish life-style for himself and his family”. [3]

“He has not denied his crimes; in fact he implies that stealing was acceptable at the time. But it wasn’t acceptable nor legal then, and it isn’t now. The reforms led by the Crown Prince have put an end to this type of gross corruption. Today, the nation’s revenues are used to fund unprecedented economic and social development, invest in technology, contribute to the diversification of the economy, the empowerment of youth and women, and the building of a nation in which tolerance, moderation, innovation and entrepreneurship prevail – the antithesis of what Aljabri was seeking when he committed his crimes.” [3]

Undoubtedly, the Saudi authorities have exerted their best efforts to disparage al-Jabri and to discredit his allegations by engaging in what seems to be no less than character assassination. In fact, it is no secret that two of al-Jabri’s eight children, namely his son Omar al-Jabri, 23, and daughter Sarah al-Jabri, 21, were captured in March last year. Until this very day, they are imprisoned without any formal charges having been filed against them. Media reports have further suggested that a son-in-law was “rendered” from a third country and forcibly returned to Saudi Arabia. On arrival, he was allegedly held and tortured, likely due to his close relationship to Saad al-Jabri. [4]

Al-Jabri warned in his CBS interview:

“I am here to sound the alarm about a psychopath killer in the Middle East with infinite resources who poses a threat to his people, to the Americans, and to the planet.”

It was also widely reported in 2018 that MBS had targeted Saad al-Jabri in Canada. This came shortly after the gruesome abduction and butchery of dissident Saudi journalist and author Jamal Khashoggi. Through what has been termed the ‘Tiger Squad’, Mohammad bin Salman allegedly pursued the assassination of al-Jabri and in effect “chased” him to the North American country due to rising tensions and in order to shore up power. [5] Such claims have been elaborately mentioned in a legal complaint first filed with the United States District Court for the District of Columbia in 2018. The complaint suggests that the so-called Tiger Squad had been dispatched by MBS to Canada with the express aim of killing al-Jabri. The former official now lives under police protection, and remains in fear of further prospective attempts against his life. [6] [7]