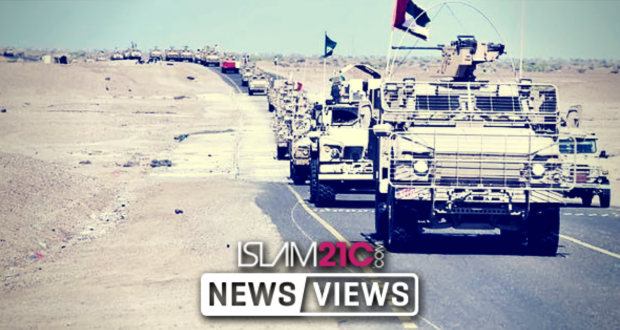 Amidst the brutal civil war in Yemen, in which various regional powers are battling for influence whilst millions suffer, reports have recently emerged about UAE attempts to take over the “Jewel of Arabia”; the Unesco-protected island of Socotra that is some 350km from the Yemeni coast.[1]

The tiny island of 60,000 inhabitants, which has escaped the war so far, is known for its unique natural environment and access to major shipping routes; it lies in the middle of one of the world’s most important oil trading channels.[2]

Earlier this month, the UAE reportedly deployed troops and military equipment to the island, taking over the airport and other strategic locations, whilst raising its flag over various official buildings.[3] One commentator explained:

“What they [the UAE] have done is found an island that is very strategically located, acts as a quasi-aircraft carrier in the middle of the Indian ocean and where they can control traffic while giving favourable access to countries that are related to them.” [4]

Their actions resulted in angry protests against their presence, especially given that there are no Houthi rebels on the island and it has enjoyed relative peace. The Government condemned the move as a “seizure” and “attempt to colonise Yemen in a power-play for commercial and security interests”.[5] The move showed a blatant motive far beyond the pretext of the civil war.

Days later, Saudi forces arrived on the island as well, claiming they were there to train and support the Yemenis.[6] Unlike the UAE presence, it is said that this deployment was coordinated with the Yemeni government and the Yemeni flag was soon seen raised above the airport and seaports again, whilst officials said the dispute had now been resolved.[7]

However, suspicions remain over the exact motive of both Saudi Arabia and the UAE. The ambassador and head of Yemen’s permanent delegation to the Paris-based UNESCO, Ahmad al-Sayyad, explained to Al-Jazeera:

“There is synergy between the roles of Saudi Arabia and the UAE. There is a hidden inclination to divide Yemen.” [8]

“The most vulnerable among the civilian population are bearing the brunt of this new offensive in Yemen’s war. All sides must abide by international humanitarian law, including taking all feasible precautions to minimize civilian casualties and the destruction of homes and civilian infrastructure.”

“Civilians fleeing in terror have reported a range of violations – we urge all sides to enforce strict compliance with international humanitarian law, and stop their forces from recklessly endangering civilians.” [9]

Elsewhere in the city of Taiz, in what makes for distressing viewing, CNN aired exclusive drone footage of the devastation and interviewed some local residents, including the mother of a starving baby:[10]

As widely reported, over 22 million face starvation as a result of the ongoing conflict, whilst the country suffers from a deadly Cholera outbreak. The UN have described the situation as the “world’s worst humanitarian crisis”.[11]

Ethar Relief is one of the main UK charities providing life-saving support to the millions affected by the deadly Cholera Outbreak in Yemen. You can help save lives, click here to find out more.

2018-05-20
Abdullah Izzadin
Previous: Erdogan calls for the formation of an “international peacekeeping force” in Palestine
Next: Civilians killed as part of Special Forces Operation in Somalia