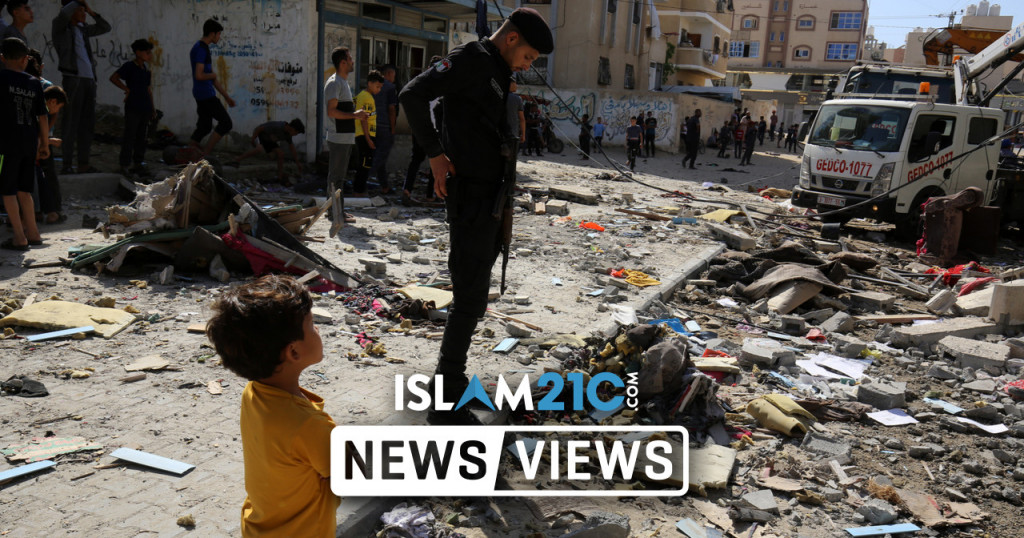 The recent round of Israeli aggression against the oppressed Palestinians in May occurred as a result of civil protests, which were a response to the apartheid state preparing to evict natives from the Sheikh Jarrah neighbourhood of East Jerusalem. The besieged Gaza Strip, which has been pummelled with dozens of airstrikes and has seen numerous residential, governmental, and commercial buildings decimated, has begun the laborious process of rebuilding itself. [1]

However, this reconstruction process will be immensely difficult due to a years-long Israeli-Egyptian blockade on the flow of numerous goods, which include construction materials such as gravel, cement, wood, and steel. Because of these tight restrictions, Gazans have no choice but to resort to using rubble from their flattened buildings in order to rebuild the destroyed infrastructure.

Palestinian workers recycle the rubble of buildings and homes that were destroyed by the occupation to be used in the reconstruction of the Gaza Strip. pic.twitter.com/GysmPGPAUE

Naji Sarhan, under-secretary of Gaza’s ministry of public works, shared with Al Jazeera the extent of the damage. During the recent escalation in violence, Sarhan said two thousand homes were demolished, a further 22,000 were partially damaged, and at least four high-rise buildings were levelled. These include the offices of Al Jazeera and the Associated Press, which were situated in an 11-storey mixed-use building. [2]

Israel targeted and then destroyed the Al Jazeera office in Gaza. It bombed the building where Al Jazeera and Associated Press journalists worked, after giving them a warning to leave.

Sarhan added that the cost of the damage ran into the hundreds of millions, with around 200,000-300,000 tonnes of rubble scattered around the Strip as a result of the Zionist aggression.

“We believe the numbers will increase as our teams are still assessing the extent of the damage wrecked, but so far there is $500m worth of damage caused…”

“The first step of recovery is the removal of rubble, especially from the high-rise and residential buildings that were destroyed, in order to prepare the sites for reconstruction.” [1]

The civilian protests in East Jerusalem were held in retaliation against a deferred Israeli court ruling, which will determine whether settlers can take over the homes of Palestinians living in Sheikh Jarrah. A brutal and disproportionate Israeli crackdown was the response to these peaceful demonstrations, which ultimately led to the deaths of 256 Palestinians, including 66 children.

Last month, the Israeli Supreme Court notified the state’s attorney general that he would have until June 8 to provide his opinion on the matter. However, Avichai Mendelbit said in a statement last Monday that “there is no place” for him to intervene. This leaves the problem undecided, with the futures of dozens of Palestinian families hanging in the balance. [3]

The Gaza Strip has been in a chokehold since 2007, due to six of its seven border crossings with the outside world being controlled by ‘Israel’, with the remaining one manned by neighbouring Egypt. In 2007, ‘Israel’ became disgruntled at the fact that Hamas won elections, which led to its governance of the Strip to this day. The Zionist regime has consistently claimed that it had to close all six border points because it had concerns Hamas would allegedly build underground tunnels or bring in materials that could be used for military purposes. As a result of the blockade, electricity and water supply to the Strip has been inconsistent and inadequate for the best part of 14 years.

It is of some solace, however, that the Egyptian-controlled crossing – Rafah Crossing Point – was in February opened “indefinitely” by Cairo. [4]

The reconstruction of the Gaza Strip with the rubble of its former buildings is not a new development. In fact, the besieged region has developed a sector dedicated to the recycling of steel rods and broken pieces of concrete into roads and houses. One recycling worker, Abu Mohammed, told The Observer in 2018, “If there is no war, we do nothing… When there is a destroyed building, we make contact with the owner to arrange salvage. This time it is with the government.” [5]

“The short bars that have been cut in the bombing are used for foundations…Since 2007, we’ve had a lot of work…It’s busier at wartime.” [5]

49-year-old Mahmoud Azzam used to transport gravel from Israel to Gaza and the West Bank before being barred. He gave a sobering reflection of the resilient nature of Gazans who are unfortunately accustomed to Israeli attacks on a regular basis: “These blocks are lower quality but cheaper … We find bits of plastic pipe, small pieces of wood, bits of steel. When the border crossing closed, imported gravel runs out. But we continued.” [5]