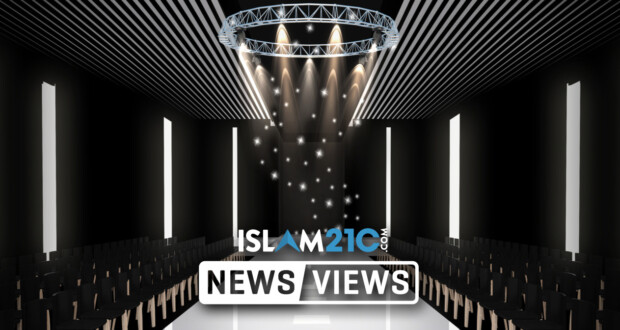 Robyn Rihanna Fenty, who goes by the stage name ‘Rihanna’, has caused mass outrage amongst Muslims on social media after including a sacred hadīth of the Prophet Muhammad (sall Allāhu ‘alayhi wa sallam) as part of her fashion show.[1]

Rihanna is messed up for using a song with a Hadith in it to play at her LINGERIE show. What is up with artists using Islam as an aesthetic?? Have some respect.

A hadīth is defined as ‘whatever is transmitted from the Prophet of his actions, sayings, tacit approvals, or physical characteristics and mannerisms.’ Hadīths are sacred in nature and are regarded as second only to the Qur’ān in the significant texts of Islam.

The 32-year-old singer and actress has dedicated her recent years to focus on her growing beauty and lingerie business. Her fashion show, which debuted on Amazon Prime on Friday, featured half-naked models and drag queens dancing while modelling her new fashion line.

The song that could be heard in the background, produced by London-based Coucou Chloe, used samples of the Hadīth that had been sped up with dance music and mixed into a house beat.

Rihanna’s first time using this song was back in 2017 as the soundtrack to the Fenty X Puma show.[2]

“The fact that it’s Rihanna’s SECOND time using the hadīth is even worse.”

The hadīth about the Day of Judgement and the end times is as follows:

This is not the first time Rihanna has disrespected Muslims. In 2013, she was asked to leave the Sheikh Zayed Grand mosque in Abu Dhabi for violating rules on the “status and sanctity of the mosque” after taking “inappropriate” photos outside of it.[4]

Many users took to Twitter to express their annoyance on the continued use of Islam as an “aesthetic”.

i can’t let Rihanna have a pass w appropriating Islam like for her first show the models wore a scarf around their heads and it looked like HIJAB and her second show she used a track that remixed a HADITH….why is no one talking about this, my religion is not y’all’s aesthetic

i feel like islamaphobia is so normalised to the point where people are calling us dramatic for being mad when our religion gets disrespected? hadith are sacred words of the prophet, they’re used to guide muslims & are second to only the Quran. rihanna should know better.

A narration of the Hadith being used in Rihanna’s Savage X Fenty show is a clear example of why cultural/religious competence is important in media. Diversity without respect and boundaries for other beliefs is useless.

as a muslim, no words can describe how disappointed i am with Rihanna for letting her models dance to hadith. Hadith are the sacred words of our prophet, you can't just use it for your lingerie show. disgusting and extremely disrespectful

People arguing that “oh Rihanna isn’t Muslim how would she know”. She’s used it twice, she has a HUGE platform, one google search on the song and she would’ve known . It’s not only HIGHLY disrespectful but is also going to lead to mass boycotts and rightfully so.

Following calls for her to apologise for the fashion show, Rihanna has issued an apology on her Instagram.

“I’d like to thank the Muslim community for pointing out a huge oversight that was unintentionally offensive in our savage x Fenty show.”

“I would more importantly like to apologize to you for this honest, yet careless mistake. We understand that we have hurt many of our Muslim brothers and sisters, and I’m incredibly disheartened by this!.”

The producer of the song, Coucou Chloe, tweeted the following statement.

I want to deeply apologize for the offence caused by the vocal samples used in my song ‘DOOM'. The song was created using samples from Baile Funk tracks I found online. At the time, I was not aware that these samples used text from an Islamic Hadith. 1/2

The latest (and in what we can assume will not be the last) debacle by Rihanna and her team is further proof that artists continue to disrespect, isolate, and downgrade our religion at the expense of our compliance. It is not an overreaction to feel appalled at the behaviour of someone who has been guilty of this before.

Additionally, not too long ago, Kanye West released a new trainer as part of his Adidas Yeezy collection named ‘Israfil’, which is the name of the angel that is said to blow the trumpet to mark the end of this world and the beginning of the Day of Judgement. Joking and even morphing aspects of the Day of Judgement into lesser known and ‘harmless’ objects is not a matter to be taken lightly. The Day of Judgement is one that instigates fear in our hearts with the hope that we live an obedient life to Allāh.

It is important for Muslims to withdraw their support of these “idols”, as we have contributed to their rise to the top and their unlimited “free passes” at demonising minorities. This is only the latest example of how celebrities have never considered Muslims as part of their audience, but we consider them a part of our day.

Finally, to the brothers and sisters that keep sharing or retweeting the offensive clip, Allāh reminds us of something better in the Qur’an:

“When you hear Allāh’s revelations being denied or ridiculed, then do not sit in that company unless they engage in a different topic, or else you will be like them.”[5]

2020-10-06
Hamza Saleem
Previous: Condolences on the passing of Abdul Ghaffar Aziz, Deputy of Pakistan’s Jamaat-e-Islami
Next: Erdoğan to Macron: Who are you to propose the reconstruction of Islam?