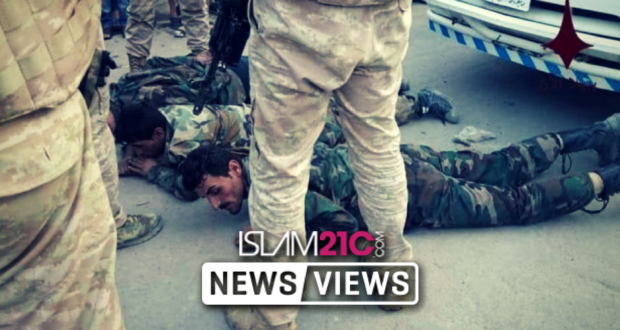 Russian Military Police publically arrested a number of Assad regime troops, as can be seen in footage which emerged over the weekend.[1]

Armed Russian soldiers are recorded forcing Assad troops to the ground in an amateur video of the incident. The regime troops are made to lay face-down at gun point with their legs spread apart, as their arms are zip-tied behind their backs.

Civilians can be seen crowding around the public arrest and applauding as the Assad troops are taken down. Several other onlookers held up camera phones to record the scene.

Syrian news websites and social media accounts shared the recent footage and photographs of the arrests which took place on a crowded street in the town of Yalda, south of Damascus.

Russian Military Police carried out full body pat-downs on the restrained Assad troops as well as thorough searches of their vehicles. They subsequently confiscated a number of stolen household items and pieces of furniture found in their possession.

Reports indicate that the regime troops looted the items from homes in Al-Hajar al-Aswad city, south of Damascus, as well as dwellings in the Yarmouk Refugee Camp – a longstanding district, home to over 100,000 Palestinian refugees.

Similar footage has been shared through social media exposing Assad troops and allied Iranian militias for looting and robbing homes in the neighbourhoods surrounding Damascus. The stolen goods are taken to be sold in black-markets of regime controlled areas.

As Syria is devastated by the conflict, reports of flagrant looting and theft by Assad forces have become increasingly widespread.[2] Even voices loyal to Bashar Al Assad have been driven to call on the dictator to reign in his men as their continued looting has been ‘hurting the feelings’ of regime supporters.[3]

However Bashar Al Assad’s true authority in Syria is put into question, as regime troops continue to be policed and commanded by the Russian military.

According to Al Jazeera, sources on the ground say that the Russian army has become the de facto authority over the Syrian regime as Bashar Al Assad becomes increasingly dependent their aid. [4]

Russia has invested heavily in the conflict, establishing extensive military bases in Khameimim and Tatrus. Reports indicate that Russian Military have expanded their control to the towns of Yalda, Babila and Beit Sahem following the withdrawal of IS fighters from those areas.

Political analysts have long questioned the motives of Vladimir Putin who has supported the Assad government since the start of the conflict. In a BBC interview Margot Light, professor of International Relations at LSE, stated:

“I don’t think that they have a genuine belief in Assad…They were thinking not in the interests of Syria, but in their own interests.”

Theories on Russia’s motives have ranged from “a theatre to test out their military equipment and doctrine” to an attempt to assert their influence on the region.[5]

The Russian military has also invested lives into the conflict; most recently with the death of four soldiers in Deir Ezzor, including two specialist advisors. The Russian soldiers were killed while manning an artillery station, following clashes with rebel forces.[6] The Russian troops present at the artillery battery were in command of Assad troops at the time, directing their fire. Three other Russian soldiers were also injured in the gunfight.

As the conflict progresses, the influence of foreign fighters continues to cement in Syria. The Assad regime has entrenched its reliance on the aid and support of Russia as well as Iranian militias and Hezbollah gunmen. By all reports it seems that in order to grasp at the last strands of his authority, Bashar Al Assad has, ironically, surrendered the sovereignty of the Syrian regime one piece at a time.