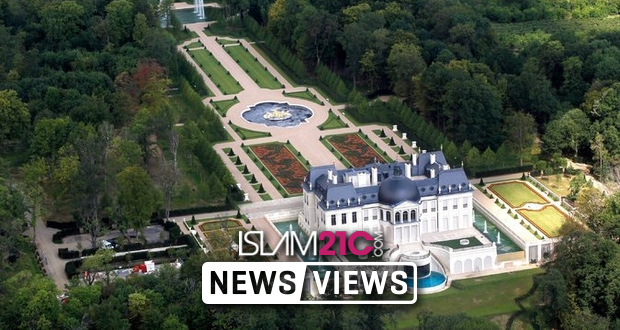 The Crown Prince of Saudi Arabia, Mohammad b. Salman, has recently been revealed as the buyer in some of the world’s most expensive and extravagant purchases; while leading anti-corruption and anti-austerity drives back home.

A string of recent reports link the Crown Prince to purchases including the world’s most expensive home in France for $300m,[1] his personal yacht for $500m a year earlier,[2] and even Leonardo Da Vinci’s painting of Jesus Christ for a world record $450m.[3]

The painting was later said to have been purchased by another Saudi Prince on behalf of the Abu Dhabi Department of Culture and Tourism,[4] but that he had acted on behalf of the Crown Prince. Aside from the hefty price tag, depictions of prophets in Islām are strictly forbidden, let alone putting them up for public display.

The New York Times later reported that the Crown Prince had purchased the ‘world’s most expensive house’. The 50,000 sq ft palace near Versailles, west of Paris, includes multiple swimming pools, a private cinema, a squash court, two ballrooms, and a nightclub. It also boasts 10 bedroom suites, a grand reception room with a 52ft-high dome ceiling, a library, and a wine cellar with space for 3,000 bottles.

The reports coincide with a nationwide ‘anti-corruption’ crackdown that has seen the arrest of Saudi Arabia’s richest merchants alongside public austerity measures in place to achieve the ambitious ‘Vision 2030’ of creating an economy that is not reliant on oil.

It is said that it is time for the Saudi princes and elite who have all gained wealth through illicit means to make amends and aid the Saudi economy, which has dramatically slowed in recent years amidst low oil prices.