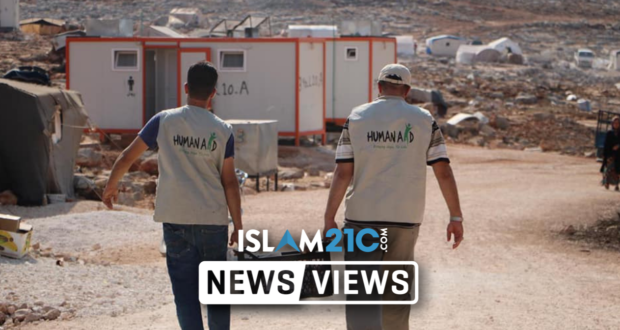 Human Aid has launched a legal challenge against the British government over its ‘counter-terrorism’ powers. [1]

The UK-based Muslim charity said it decided to launch the legal challenge after its aid workers had been stopped under the governments Schedule 7 stops.

Under the stop and search power, officially titled Schedule 7 of the Terrorism Act 2000, police are allowed to ‘stop and question’ individuals who are travelling abroad in order to determine whether they are a ‘terrorist’. The law also allows the police to “detain and search” individuals for up to six hours for questioning. [2] The powers do not require police to have any reason for suspicion and if an individual does not comply, it is considered a terrorism offence.

Human Aid is a charity that works in some of the most devastated regions across the world, providing them with food and health provisions. Some of these locations include Yemen, Syria and Gaza.

Human Aid said that its aid workers were stopped in July 2019 at Heathrow Airport by Border Police as they were en route to the Gaza strip to deliver lifesaving aid. During the Schedule 7 stop Human Aid’s donations for their projects were also seized.

The chair of Human Aid UK, Nur Choudhury said that his staff members had been repeatedly stopped by the police whilst going through different UK ports. He also claimed that aid workers from several other Muslim charities in the sector had faced similar treatment. [3] Choudhury Said:

“Human Aid UK has had staff and volunteers stopped repeatedly under Schedule 7 powers. During these stops, our aid workers are searched, interrogated under terrorism laws and their fingerprints and DNA samples are taken,”

“There seems to be no way to stop this harassment and criminalisation of aid work. One begins to wonder if it is a crime to care for others.”

In a press release, Human Aid said that:

“In addition to facing intense scrutiny, many Muslim charities have had their bank accounts closed without reason, faced funding platforms refusing to service them and also faced ongoing negative media portrayals.”

“HAUK itself has endured bank account closures, denial of service and a Commission inquiry that lasted in practice over five years.”

Schedule 7 has faced fierce criticism from human rights groups calling for the ‘counter-terrorism’ powers to be removed. This follows CAGE’s recently published report which revealed that 419,000 people have been questioned around the UK under Schedule 7 since 2009. [4]

The report suggests that the detaining of Muslims at UK ports and airports has become widespread, and that the Schedule 7 border powers are a manifestation of structural Islamophobia. As a result, CAGE made a complaint to the policing regulator, the Independent Office for Police Conduct, on behalf of ten individuals affected by the harassment procedure. The advocacy group has written to MPs on the APPG on British Muslims to “spell out” concerns regarding these detentions. [5]

The international director of CAGE, Muhammad Rabbani, who himself has been stopped over 20 times under Schedule 7 powers, said:

“There is a real sense of frustration from impacted communities about the sweeping and Islamophobic nature of Schedule 7 stops. Public bodies must uphold their duty to protect the rights of minorities, and it is why we are asking the APPG to urgently investigate this matter with the Home Office.”

Following the release of the report, Cerie Bullivant, who himself has been repeatedly stopped under Schedule 7, launched an online community petition urging the All-Party Parliamentary Group (APPG) on British Muslims to investigate the Home Office over their conduct with Schedule 7 powers. [6]