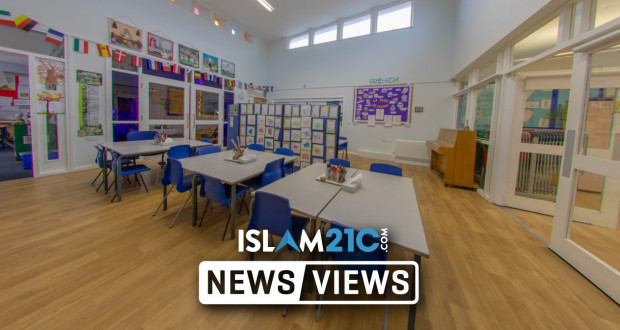 In an explosive development, the Scottish Health Secretary Humza Yousaf has asserted that Little Scholars – a nursery establishment in Broughty Ferry, Dundee – discriminated against his two-year-old daughter on account of her ‘ethnic’ name. The preschool has been put in the spotlight after stating that it apparently had no space for Yousaf’s daughter, Amal. Yet, what is shocking is that it in fact had ample capacity for other applicants with ‘Western’-sounding names. The nursery has strenuously denied the allegations. [1]

The 36-year-old Yousaf is one of Scotland’s foremost Muslim politicians, holding the prestigious position of Cabinet Secretary for Health and Social Care, while also representing Glasgow Pollok in the Scottish Parliament. During his political career, he has been championing for more inclusivity in Scottish society, particularly during his former tenure as Justice Secretary between the years 2018-2021.

Yousaf has pressed the nursery to elaborate on its seemingly deliberate case of discrimination. In a decision which Yousaf emphasised was “not a step my wife & I have taken lightly”, he referred the nursery to the Care Inspectorate. The Care Inspectorate functions as Scotland’s healthcare regulator and is the counterpart of the Care Quality Commission (CQC) of England and Wales. [2] [3]

In lodging the said complaint to the Care Inspectorate, Yousaf has urged the watchdog to look into whether “ethnicity or religion” was a basis on which Little Scholars discriminated against his daughter’s nursery application. [1]

I cannot tell you how angry I am. As a father all I want to do is protect my girls, yet aged 2 I believe my daughter has faced discrimination. If this had not happened to me I'm not sure I would have believed it could happen in 2021

How many other families has this happened to?

We are fooling ourselves if we believe discrimination doesn't exist in Scotland.

I believe evidence we have proves our case beyond doubt. As well as reporting the nursery to Care Inspecorate we are also seeking legal advice.

In the first of a number of understandably heated posts on the social media platform Twitter, Yousaf noted that his wife, Nadia El-Nakla, asked her Caucasian friend to submit a similar application to the nursery. Surprisingly, the school responded favourably to her friend, while refusing El-Nakla’s application.

“After our nursery application for our daughter was refused a 2nd time, my wife asked her White Scottish friend to put in an application for a Child the same age. Within 24hrs of refusing our application my wife’s friend’s was accepted.” [2]

The Health Secretary, who is Scotland’s first ever Muslim and non-white member of Cabinet, further added that his wife sought to rapidly investigate matters upon learning that their daughter had been denied a place at Little Scholars.

“I was sure there must be rational explanation but my wife felt differently. She created a profile with a White Scot name & made an application, she also asked her sister ‘Sara Ahmed’ to submit an application on same day. Her sister was rejected but White Scot application accepted.” [4]

The husband and wife duo thereafter sought investigative journalists to further examine the situation. They requested the associate editor of the Daily Record, Annie Brown, to do her own study into the matter.

“At this point we asked @anniebrownword at @Daily_Record to investigate. She created two profiles with kids same age, their requirements the same. ‘Aqsa Akhtar’ application was rejected while ‘Susan Blake’ was offered a choice of 4 afternoons. No explanation has been forthcoming.” [5]

The nursery, which is believed to be owned by people of “Asian heritage”, has said it has “nothing to hide” and that it would “absolutely welcome” a Care Inspectorate investigation. It elaborated its stance by issuing the following statement:

“We note Mr Yousaf’s call for a Care Inspectorate investigation and this is something we would absolutely welcome.

“We have nothing to hide and look forward to the opportunity to demonstrate the policies and procedures we have in place to ensure we are a nursery that is open and welcoming to all.” [6]

Moreover, Usha Fowdar, a spokesman for the nursery’s owner, said the company rejected allegations of religious or racial discrimination.

“…In addition to our owners being of Asian heritage, across more than a decade we have regularly welcomed both children and staff from a range of different religious, cultural, ethnic and racial backgrounds including two Muslim families currently.

“We have also regularly made arrangements to accommodate different lifestyles by, for example, providing a halal menu for those children who come from Muslim families.” [7]

While this alleged discrimination case is still in the preliminary stages of investigation after being reported to the relevant regulatory watchdog, it coincidentally comes days after the managing director of Islam21c Amanpaul Dhaliwal was prevented from entering Her Majesty’s Passport Office (HMPO). Dhaliwal was barred entry merely for donning a “Free Palestine” hoodie. [8]

If the examples of Humza Yousaf’s toddler child and the director of Islam21c are anything to go by, one may argue that they indicate how prevalent anti-Muslim discrimination is in the country. Such discriminatory practices extend from the capital city of the UK to 480-odd miles north in the Scottish city of Dundee, even affecting those in prominent positions in the British Muslim sphere.