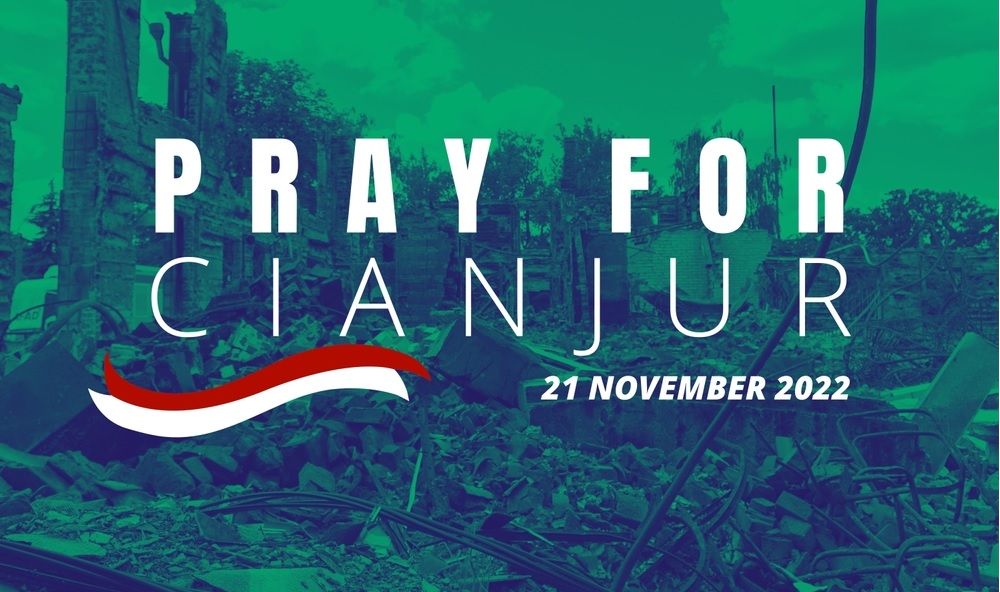 Hundreds of people have been confirmed dead following a powerful earthquake that struck a mountainous region in the Indonesian province of West Java on Monday. Rescue workers are relentlessly searching for survivors as media reports suggest that over 150 people are still to be accounted for. In addition, it has been reported that many of the 268 confirmed deaths were children. [1]

With over a thousand injured, the latest quake to hit Indonesia has resulted in the damage or total destruction of roads and other transport infrastructure. As a further result, rescue efforts have been hampered, not only by damaged roads, but also by the size of the area affected by the quake. [1]

We often hear about so-called “natural” disasters but we do not always take stock of the broader situation, i.e. the Creator and His position as the All-Mighty. To this effect, the great scholar of Islam, Ibn al-Qayyim (raḥimahu Allah), once said,

“Allah sometimes gives the earth permission to breathe, which is when major earthquakes happen; this makes people feel scared, so they repent, give up sins, pray to Allah, and feel regret [for their sins].

“When there had been an earthquake, some of the Salaf said: ‘Your Lord is warning you’. When Madina was struck by an earthquake, ‘Umr ibn al-Khattāb (radiy Allāhu ‘anhu) addressed the people and said, ‘If there is another earthquake, I will not stay here with you.'” [2]

As the Monday earthquake happened during school hours, a number of children were hurt or killed. A 14-year-old boy named Aprizal Mulyadi described how his “legs were buried under the rubble”, before his friend, Zulfikar, pulled him to safety. However, in a tragic development, Zulfikar was killed after becoming trapped in the rubble. May Allah accept him as a shahīd. [1]

The governor of West Java, Ridwan Kamil, said on Monday,

“The majority of those who died were children. So many incidents occurred at several Islamic schools.” [3]

Located in the so-called “Ring of Fire”, Indonesia sits on a particularly volatile part of the planet; this is because the continental Eurasian and Australian tectonic plates converge within the country’s borders. Moreover, the nation is located on the meeting point of two oceanic plates – namely the Philippine Sea Plate and the Pacific Plate. It goes without saying that as a result of its complex geography and geology, the country regularly experiences earthquakes and tsunamis.

Prior to Monday’s quake near the town of Cianjur – which the US Geological Survey has classified as VI on the Modified Mercalli intensity scale or MMI – there have already been three other quakes in 2022 alone. [4] And although these prior instances did not cause nearly as much devastation as the most recent quake, 3,000 buildings were reported to have been damaged during the Java quake of 14 January 2022. [5] In addition, during the 6.1-magnitude 25 February quake in Sumatra, over 425 people were injured. This quake was classified as VIII on the MMI scale. [6]

As painful as it is to be amongst the destruction during such events, and as difficult as it is to share in the pain as a wider Ummah, we must take this calamity as a warning to turn back to Allah and to repent for our wrongdoings. We should regularly remind one another that “natural” disasters including earthquakes, tsunamis, and others are but reminders for the Muslims to check themselves and to turn to Allah in repentance. [7]

Allah states in the Qur’ān,

“We will show them Our signs in the universe and within themselves, until it becomes clear to them that this (i.e. the Qur’ān) is the truth. Is it not enough that your Lord is a Witness over all things?” [9]