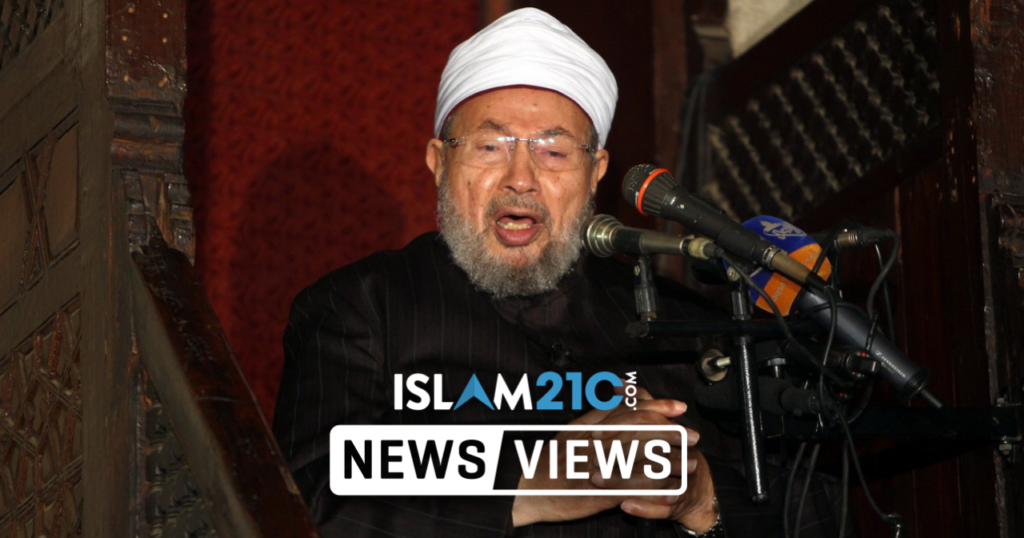 Ola al-Qaradawi has now been held for more than two years. She was taken into custody again on Thursday just a few hours after she was released from a previous case.

The Egyptian security forces arrested Ola al-Qaradawi and her husband Hossam Khalaf in early July 2017. They were later accused of having links to the Egyptian Muslim Brotherhood. She had been held in solitary confinement in al-Qanaater Women’s Prison. Human rights organisation, Amnesty International has already concluded that the way the Egyptian state has dealt with her case amounts to torture by international standards. [2]

Sheikh Qaradawi who is the former Chairman of the International Union of Muslim Scholars, has protested the injustice that she has been suffering, and how his heart burns at her being subjected to a “deliberately slow execution”.

Sheikh Qaradawi said: “For an entire year in solitary confinement, in one of the world’s worst prisons, my daughter Ola al-Qaradawi has been subjected to terrible treatment in her tragic imprisonment. This unceasing abuse and humiliation is a deprivation of her most basic rights.”

Sheikh Qaradawi addressed his daughter in a letter saying:

“Oh my daughter I have not forgotten what you look like, and I still remember you in my mind, and I ask Allah in my supplications, prayers, and in my seclusion that He saves you from these oppressors, and every father feels the pain of his heart burning and making his eyes overflow whenever his daughter suffers an injustice or transgression”. [3]

According to Egyptian law, these fresh charges on Ola al-Qaradawi means that she could potentially be held again for another two years in pre-trial conditions.

Her lawyer, Ahmed Magdi, said that Ola had begun a hunger strike again to protest against the Egyptian authorities’ decision. Ola’s daughter, Aayah said that her mother has “reached the point where she is not able to take it any more…She’s been in solitary confinement for the past two years; she’s not even in contact with other prisoners,” [4]

Sheikh Qaradawi in his letter said:

“This is how an innocent person in Egypt is thrown into prison, and this is how they are consigned to their oppression” adding “If I thought that putting in an appeal to them (the Egyptian authorities) would have worked, I would have done so, but they are completely heartless with rotten organs. Allah has removed mercy from their hearts, and their morals from their behaviours, while all of this is the case, I resort only to Allah who has lordship over the heavens and the earth, and sufficient is Allah as a guardian.”

“Every free person in this world should do what they are able to do save you and the tens of thousands of other unjustly imprisoned individuals from the abuse and oppression. So, to Allah is my complaint, and there is no power or ability to do anything except with Allah the Majestic, and I place you and your husband in the trust of Allah in who trust is never misplaced.”

Ola is amongst thousands of others that have been put into solitary confinement and even denied much needed medical assistance as prisoners health rapidly deteriorates over the years. Since the 2013 military coup, the regime has cracked down on all channels of legal dissent and opposition, arresting many supporters of Morsi, the Muslim Brotherhood, and those who are simply against the military coup, with many more being killed. The regime has systemically tortured many political prisoners and has denied them the right to fair representation and a fair trial.

Will Morsi’s Death Awaken our Voices against Injustice?

President Morsi: “Our Brother, Our Martyr”

Mohamed Morsi: The final minutes of the unyielding president