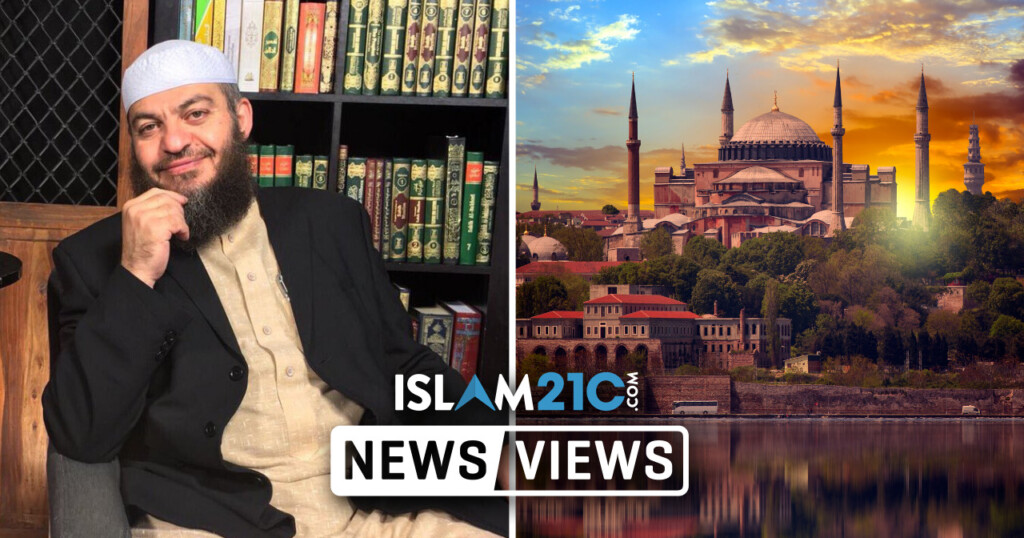 A Turkish court on Friday ruled that Istanbul’s iconic Hagia Sophia will be converted from a world-renowned museum back into a mosque.

The change has long been sought after by Turkish President Recep Tayyip Erdoğan, who signed a decree on Friday opening the building for worship and paving the way for its reconversion to a mosque.

This change was one of President Erdoğan’s campaign pledges during the Istanbul municipal elections last year. [1]

President Erdoğan declared the Hagia Sophia Mosque open to Muslim worship after a top court ruled that the building’s conversion to a museum in 1935 by modern Turkey’s founding statesman, Mustafa Kemal Atatürk, was illegal.

The court concluded that it would not legally be possible to use the building as anything other than a mosque, as defined in its original deed.

Hagia Sophia had been used as a church for 916 years under the Byzantine Empire but was later converted into a mosque in 1453 by Sultan Mehmed II after the Ottoman Empire conquered Istanbul.[2]

The building then underwent necessary restoration work to emulate the characteristic features of mosques, including the addition of minarets for the call to prayer.

It was then changed to a museum in 1935 by then-president Atatürk under the Turkish Republic, after the dissolution of the Ottoman Empire.

However, in recent years, Turkish leaders, including President Erdoğan, have called for it to be used as a mosque again, enjoining the recitation of the Qur’ān in its vicinity on special occasions.

In response to the announcement, Sheikh (Dr) Haitham Al-Haddad said in a statement:

In the Name of Allāh, the most Gracious and most Merciful. All praise belongs to Allāh. May the peace and blessings of Allāh be upon His Final Messenger, Muhammad (sall Allāhu ‘alayhi wa sallam) and his family and his companions.

On behalf of myself, the Muslim scholars in the UK, the Imams and the British people at large, I would like to extend my congratulations to the Muslim Ummah, the Turkish people, and President Erdoğan for this historic achievement in which truth has been established and the great Mosque of Hagia Sophia has regained its lost status as a mosque. Enough evidence has been released to confirm that this place was acquired legitimately by Sultan Muhammad Al-Fatih in 1453, when he made it a masjid that is a waqf for all Muslims. Therefore, there is no point discussing whether Muslims have the right over this place or not. The decision was made by the Turkish high court.

I must say that this was a courageous move taken by President Erdoğan and his AK Party. Professor Necmettin Erbakan tried for a long time to achieve this decision, yet he ended up in jail. However, through wisdom and dedication, President Erdoğan has managed to achieve this great goal by the grace of Allāh. Mosques are the most beloved places on Earth to Allāh as they are the houses of Allāh.

“And the mosques are for Allāh (alone), so invoke not anyone along with Allāh.”[3]

It was narrated from Abū Hurayrah (Allāh be pleased with him) that the Prophet Muhammad (sall Allāhu ‘alayhi wa sallam) said:

“A Muslim does not regularly attend the mosques to perform prayer and remember Allāh except that Allāh is pleased with him, just as the family of one who is absent feels happy when he comes back to them.”

If Allāh is so pleased with the person who attends His mosques, then how much love and reward will He show to those that facilitate a mosque to be available to all Muslims after they were deprived?

It is sad and painful to see that while most Muslims are celebrating this achievement, some Muslims are not happy with the decision and have used it to increase their hatred of President Erdoğan and his party.

We appeal to people who are just and love justice to show their support to the Turkish people and their leaders for this great achievement.

“The mosques of Allāh are only to be maintained by those who believe in Allāh and the Last Day, establish prayer, give zakāh, and do not fear except Allāh, for it is expected that those will be of the [rightly] guided.”[4]

Finally, we ask Allāh to protect all of our mosques all over the world and to use us in the service of such places.

Call to prayer from the Hagia Sophia, hours after it was converted into a mosque pic.twitter.com/dqyUQ16q1Y