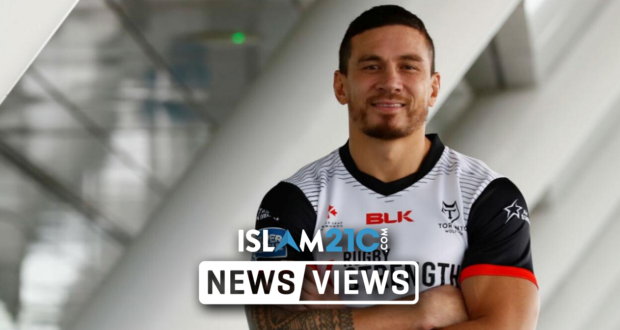 Sonny Bill Williams has refused to wear the logo of the Rugby Super League’s betting firm sponsor due to his Islamic beliefs.

The 34 year old, who converted to Islam in 2009, made the decision to retire from his international role after the Rugby World Cup in Japan, and has since signed a $10 million two-year contract with Canada-based club Toronto Wolfpack in November 2019. [1]

However, since 2017, the main sponsor of the league has been the betting company Betfred, which features its name and logo on all players’ shirts. To counteract this, Williams has refused to garb the shirt and has attributed his principled stance in choosing not to do so because of his religious beliefs.

“As I learn more and develop a better understanding of my faith, I am no longer comfortable doing things I used to do. So while a logo on a jersey might seem like a small thing to some people, it is important to me that I do the right thing with regards to my faith and hope people respect that.”

This is not the first time the rugby star has boycotted a brand. In 2017, with permission from the New Zealand Rugby Union, Williams covered up the Bank of New Zealand logo on his Auckland Blues kit shirt. [2]

“My objection to wearing clothing that markets banks, alcohol and gambling companies is central to my religious beliefs and it is important to me to have been granted this exemption.”

Chairman of Toronto Wolfpack, Bob Hunter, has confirmed that the team and betting company will respect and support his decision.

“I think Betfred will benefit by taking the position that we respect and honour the player’s religious beliefs.”

“In today’s society there are some very sensitive issues but I think the sponsor can say ‘yes, okay, we understand this. He’s a big brand and big name but we get it’.”[3]

His decision is expected to create drama with the English authorities who run the Super League, but Auckland University marketing head, Dr Bodo Lang, believes it shows the power of the ‘Sonny Bill Williams’ brand. Williams continually uses his public platform to speak about his dedication to Islam, as well as social issues of racism and inequality.