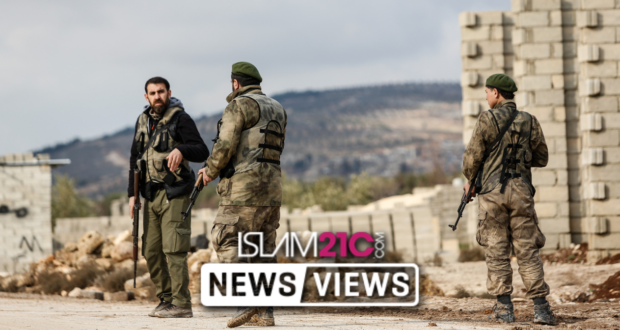 Syrian military units have purportedly entered the hotly contested city of Manbij after Kurdish forces had requested their assistance against an imminent Turkish offensive.

The YPG had invited regime forces to take control of the northern section of Manbij and set up a defensive perimeter in preparation for a campaign by the Turkish military.

The YPG said in a statement:

“We invite the Syrian government forces which are obliged to protect the same country, nation and borders, to assert control over the areas our forces have withdrawn from, in particularly Manbij, and to protect these areas against a Turkish invasion.” [1]

The state-run SANA News Agency also reported that the general commander of the armed forces had entered the city and raised the national flag on government buildings, guaranteeing “full security for all Syrian citizens and others present in the area.” [2]

However, according to Al Jazeera, residents of Manbij have disputed this claim.

“Manbij residents who we spoke to have said that they have not seen any sign of Syrian forces in their city but what we know is that Syrian government troops have already been on the outskirts of the city, where they were part of an international coalition that is fighting remnants of ISIL” Al Jazeera said. [3]

The YPG said that their appeal to the Syrian regime was a last-minute resort and a ”tactic by its fighters to avoid confrontation with the Turkish forces who they, of course, know they are no match for.” [4]

Syrian military units had entered the Kurdish controlled north before the YPG had requested their assistance. However, the supposed entry into Manbij has raised concerns that there could be a possible clash between Syrian and Turkish forces.

In recent days Turkey has been massing troops on its southern border with Syria in preparation for a new campaign against Kurdish militant groups east of the Euphrates.

The Turkish backed FSA has also moved troops and armoured vehicles to the frontline that separates the FSA held west from the Kurdish held east.

On December 20th, US president Donald Trump ordered the full withdrawal of US forces from Syria. The decision came as a shock to its Kurdish allies as US troops had stood as a buffer between them and Turkish forces in the west.

With the surprise US decision, Turkey announced they will launch a new offensive with the aim of defeating both Daesh and Kurdish forces and liberating territory east of the Euphrates river.

The YPG and the SDF are now searching for new allies to help protect areas under their control. However, it is uncertain what the new Syrian-Kurdish alliance will entail in the future.