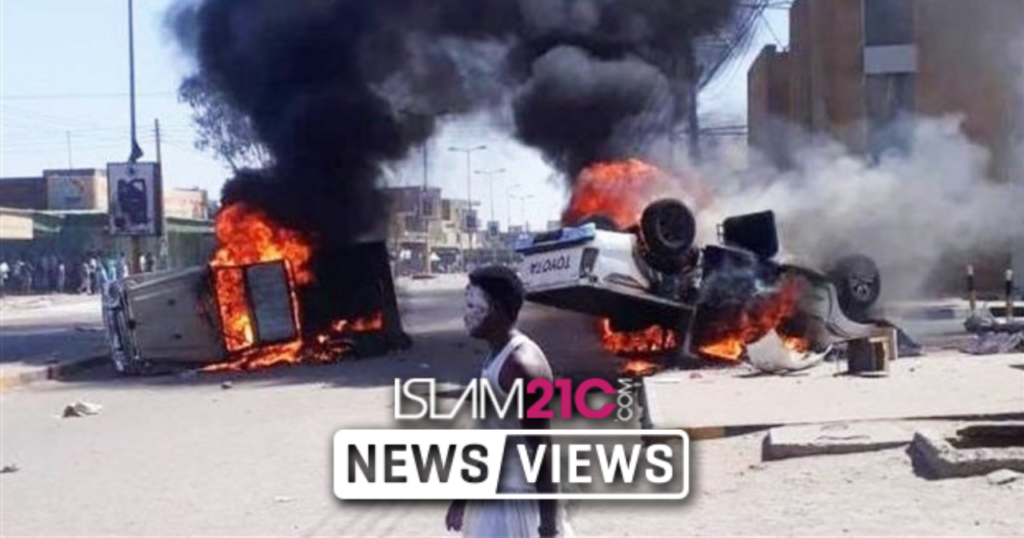 Videos posted online by Al Jazeera appear to show protestors marching towards the presidential palace before chaotically dispersing as riot police opened fire in an attempt at diffusing the crowds. [1]

According to organisers of the march over 100 protestors were injured as they chanted “the people want to bring down the regime!” [2]

“Amnesty International has credible reports that 37 protesters have been shot dead by the security forces in five days of anti-government demonstrations that have rocked the country.”  [3]

The demonstrations initially began over the rising prices of basic goods and necessities such as bread and fuel. However, they have grown in the past week and are now calling for president Omar al-Bashir to resign.

Opposition groups and activists have also called on more people to take to the streets and rally in support of demonstrations against Bashir. As a result, demonstrations have spread to other cities such as Dongola, Port Sudan and Atbara City.

A network of Sudanese journalists have gone on strike in response to the deadly crackdown.

The Sudanese Journalist’s Network, a group of opposition activists, stated “we declare a three-day strike from December 27 to protest against the violence unleashed by the government against demonstrators.” [4]

Furthermore, the Sudanese Doctor’s Association launched a strike on Monday and joined calls for Bashir to resign. They were soon joined by medical students at the University of Gadarif in eastern Sudan.

“The protest staged by Gadarif’s medical students and doctors is part of the wave of demonstrations that have continued throughout this week.” [5]

“The students and the doctors expressed their support for their fellow demonstrators and their condemnation of the government’s use of force against them.”

The recent protest was organised by The Sudanese Professionals Association, a coalition of Sudanese trade union organisations and has been supported by the prominent opposition National Umma Party.

According to a civil society group, authorities in Sudan have arrested at least nine opposition leaders as well as activists. [6]

Omar al-Bashir came to power in 1989 in a military coup and has since been ruling the east African nation with his National Congress Party for 29 years.

Sudan has faced chronic cash and fuel shortages since South Sudan broke away and became independent in 2011 and in the process, has lost 75% of its oil fields.