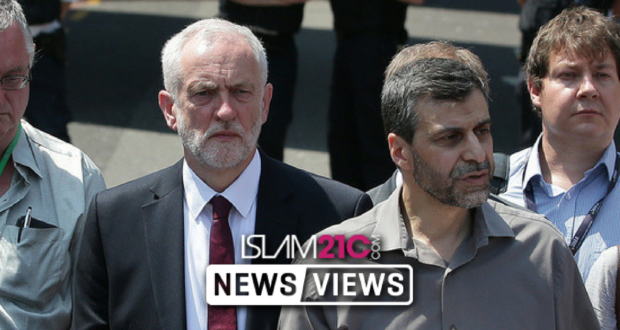 In an embarrassing settlement, The Sunday Telegraph has paid “substantial damages” to Mohammed Kozbar after an article by “journalist” Andrew Gilligan was found to be defamatory.[1] Andrew Gilligan, who is no stranger to the courts, falsely portrayed Mohammed Kozbar, general secretary of Finsbury Park Mosque, as a supporter of “violent Islamist extremism” as part of a botched attempt to smear the Labour leader, Jeremy Corbyn.[2]

In March 2016, the Sunday Telegraph published an article titled: “Corbyn and the mosque leader who blames the UK for Isil.” The article attempted to smear the Labour leader with “extremist” views allegedly held by Mohammed Kozbar. The “grave and unjustified” defamation was intensified by the claim by The Telegraph that Mohammed Kozbar had declined to comment, when he hadn’t even been contacted to do so.

Mohammed Kozbar has been lauded for not meekly going into the night, but fighting the Sunday Telegraph, despite their significant legal resources, and ultimately won a sizeable settlement and detraction at the High Court. The Telegraph has now removed the defamatory article from its website.

“It was not just myself who was the target of this article, it was Jeremy Corbyn. The aim was to damage the reputation of Jeremy and make his progress with the Labour party more difficult.”

Mr Kozbar had initially made a complaint to the press regulator, Ipso, however, as Jonathan Coad of Keystone Law, who represented Mr Kozbar, stated expressing his dissatisfaction with the Ipso ruling:

“While there are many responsible elements of the press, the demonising of Muslims in some parts of it is immensely destructive. These legal proceedings should never have been necessary. The article should not have been published.” [3]

This is not the first time that Andrew Gilligan has cost his publisher significant damages; in January 2016, Mr Gilligan wrongly accused a man of being an “Islamist activist” who was seeking to undermine the government’s controversial Prevent strategy. The Telegraph then paid out a reported £20,000 in damages.[4] Despite The Telegraph’s apology, at the time of writing, the disgraced journalist Gilligan has yet to follow with good grace. The Daily and Sunday Telegraph paid “substantial damages“ to Mr Mujibul Islam, a businessman based in Tower Hamlets, after a series of false articles, principally written by Andrew Gilligan about Mr Islam’s dealings with former mayor of Tower Hamlets, Lutfur Rahman.[5]  Quite which spendthrift publisher will be cavalier enough to underwrite Mr Gilligan’s next inaccurate anti-Muslim diatribe, against defamation, is uncertain. Cheque books to the ready.

Mainstream press such as the The Times and The Telegraph have routinely published defamatory and deceitful information particularly aiding in the distraction that is anti-Muslim bigotry and Islamophobia. Just one of many recent examples is The Times’ article on the placement of a child with Muslim foster parents in East London. In the article, The Times claimed “a white Christian child” was left distressed after she “was taken from her family and forced to live with a niqab-wearing foster carer.” The family judge in the case, took the rare step to release confidential court papers which showed the child herself had Islamic heritage, that her grandmother, with whom she would ultimately be placed, was a “non-practising Muslim” who spoke very little English.[6]

In the current anti-Muslim climate, it is the responsibility of all Muslims to stand against all forms of discrimination and bigotry, especially in the media. Instead of placidly accepting the tirade of hate, Muslims should stand up and be counted, organise themselves, gather funds, support one another to take legal action to hold bigoted articles and journalists to account.