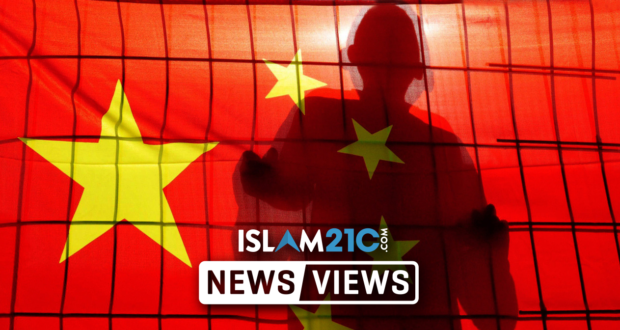 A first-hand and disturbing account by a woman held as a prisoner at the now infamous ‘re-education’ camps in China has revealed that its inmates were gang raped, tortured, and forced to eat pork. [1]

Detained in November 2017, Sayragul Sauytbay is a Chinese Muslim who escaped from the locality in which she was held for several months. Sautoy said she was brought in to the camps to teach the Chinese language and the propaganda of the Communist Party. Inmates were forced to recite slogans such as “I love China,” “Thank you to the Communist Party,” “I am Chinese,” and “I love Xi Jinping.”

“Anyone who didn’t follow the rules was punished. Those who didn’t learn Chinese properly or who didn’t sing the songs were also punished.” [2]

The 43-year-old has a background in teaching, which meant she avoided the very worst of the conditions in the camp. She gave further details on the cramped conditions other prisoners experienced, adding that “there were almost 20 people in a room of 16 square metres.”

“There were cameras in their rooms, too, and also in the corridor. Each room had a plastic bucket for a toilet. Every prisoner was given two minutes a day to use the toilet, and the bucket was emptied only once a day.”

Women were repeatedly raped and frequently assaulted before other ‘prisoners’ in order to methodologically use their reactions and disapprovals to incur further punishment as part of the terror in the camps.

“The policemen ordered her to disrobe and simply raped her one after the other, in front of everyone.”

“While they were raping her they checked to see how we were reacting. People who turned their head or closed their eyes, and those who looked angry or shocked, were taken away and we never saw them again.”

“It was awful. I will never forget the feeling of helplessness, of not being able to help her.”

“On an everyday basis the policemen took the pretty girls with them, and they didn’t come back to the rooms all night.” 1

Sauytbay said that in addition to observant Muslims prisoners being forced to eat pork, mysterious medical experiments would take place whereby “inmates would be given pills or injections” that “had different kinds of effects.”

“Some prisoners were cognitively weakened. Women stopped getting their period and men became sterile.”

CCP officials lead Chinese journalists on a guided tour of a Muslim concentration camp in Xinjiang, even showing the inside of purpose built torture rooms.

Upwards of 3 million Muslims are detained in these camps.

In March of last year, the former teacher was released from the camp to return to her former role as the director of five nurseries, but was fired three days after her release and interrogated by police officers who accused her of treason.

They told her she would return to the camp as an inmate instead of a teacher, but she was more determined to see through her other plans.

“Having already been in a camp, I knew what it meant. I knew I would die there, and I could not accept that.”

“I said to myself that if I was already fated to die, at least I was going to try to escape.”

After having witnessed what life would be like for her in the camps, Sauytbay escaped to Kazakhstan by climbing through a window to her neighbour’s house, where she would later be re-united with her family.

Her message to the world:

“The world must find a solution so that my people can live in peace.”

“The democratic governments must do all they can to make China stop doing what it is doing in Xinjiang.”