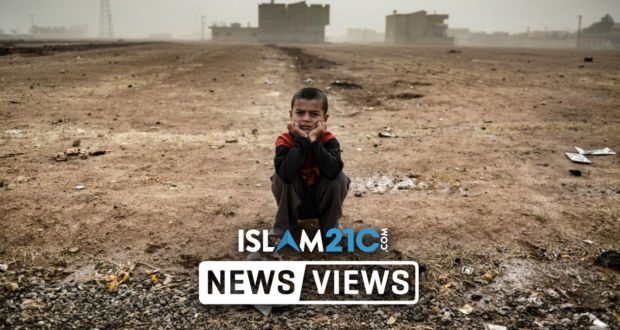 Over 235,000 people have fled the Idlib region over the past two weeks after regime forces targeted the last rebel base in Syria. [1]

The United Nations Office for the Coordination of Humanitarian Affairs said on Friday:

“With the latest escalation of violence in northwest Syria, civilians in Idlib governorate are again suffering from the devastating consequences of hostilities.”1

Tens of thousands of families have been displaced during the brutal eight-year civil war, many of whom have been heading north in trucks and private cars to cities and refugee camps in northern areas of Idlib.

“Many who fled are in urgent need of humanitarian support, particularly shelter, food, health, non-food and winterisation assistance.” [2]

Fuel shortages and the fear of being hit by a bomb during their travels has hampered the movement of people to neighbouring areas of the Aleppo province, with many “frightened to move, fearing the risk of air strikes and shelling along the routes.”2

The fighting had intensified since late November after Russian-backed forces committed to an increased air raid assault on rebels in southern Idlib.

This comes after a supposed ceasefire deal in August negotiated by Russia, whose military campaign is in support of Assad. Russia called for a de-escalation from Turkey, France, and the UN.1

However, the fighting continued as Assad attempts to regain control of Syria from rebel fighters, having seized dozens of towns and villages since mid-December.

David Swanson, a UN regional spokesperson for the Syria crisis, said that more than 80% of displaced civilians are women and children:

“This comes on top of the displacement figures that we had from the end of April to the end of August where more than 400,000 people have been displaced.”

On Saturday, hundreds of Syrian and Turkish demonstrators gathered near the Russian consulate in the Turkish capital to protest the intensified Russian and Syrian regime bombardment on Syria’s last rebel held-province of Idlib.

Mohammed Kreimish, one of the organisers of the protest, told Al Jazeera:

“We wanted to also highlight the regime’s brutality against civilians and shed light on the humanitarian situation unfolding in Idlib.”[3]

Pictures of victims of the attacks were held up in downtown Istanbul “to show the world that Russia is complicit” to the killing of civilians. Others held banners that read, “Russia is killing our people and children and the world is not doing anything” and “More than 30,000 children killed by Russia and Assad regime.”

One of the demonstrators, Ahmed Marwan, said:

“What does Russia want from us? Kids, wives are dying. People are dying.”

“We aren’t terrorists, we are humans. We came to this country to live. Leaving your homeland isn’t easy but we live in this pain. Enough already.”

“We are here to protest this massacre going on in Syria.”

“Here I also want to make this call to Russia, and especially Bashar al-Assad … anyone who is responsible for this massacre, all of them have to be judged and pay for these war crimes in the name of humanity.”

With the heightened bombardment from the Russian-backed Syrian regime displacing 235,000 Syrian citizens, the International Rescue Committee has warned that conditions in the region are at a “breaking point”, adding that the continued violence could displace as many as 400,000 in the coming weeks.

2019-12-30
Hamza Saleem
Previous: The Stupidity of ‘Rewriting’ the Quran
Next: India: Police use facial recognition at rally amid privacy concerns