Are you ready for our first ever NATIONAL CAMPAIGN?
Home / News / Syria: International crisis looms as Syrian regime forces advance on Idlib 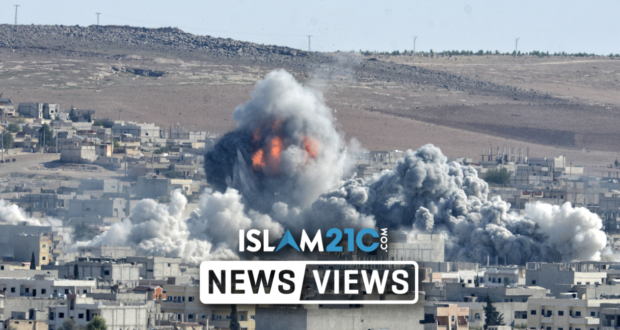 The last rebel-held stronghold in northwest Syria has been the target of a vicious assault by the criminal Assad regime. Backed by Russian air power, the Syrian regime began its assault on Tuesday. It has since made significant and rapid advancements toward the Idlib province, ransacking towns and villages on its way.

The latest attempt to reach a ceasefire on 12 January was ignored by Syrian forces. Since Tuesday, over 200 airstrikes have been launched on the rebel-held territory in northwest Syria. The strikes have forced 700,000 previously-displaced civilians to once again attempt to escape the onslaught of the Assad regime.

In one raid alone, 11 civilians are reported to have been killed, as a Russian air strike smashed into a bakery and clinic in the town of Ariha. Rescue workers and rights groups present on the ground have also reported airstrikes targeting dozens of schools, hospitals, and homes.[1] It is now believed that 21 people have been killed in recent days.

The charge on Ariha comes after the campaign earlier this week by the Assad regime to capture the town of Maarat al-Numan – the second largest town in the Idlib province. The town strategically straddles the M5 highway between Damascus and Syria’s second city, Aleppo. It remains vital for transport and trade between the two cities.

The Syrian Observatory for Human Rights (SOHR), based in the UK, reported that the regime’s forces had proceeded to seize a further 25 towns and villages in neighbouring areas.

James Jeffrey, the US Special Representative for Syria, in his address to the media, noted that the recent violence had displaced 700,000 people, noting that the air strikes were ‘mainly against civilians’.[2]

The offensive continues a string of recent assaults and attacks by Assad’s regime in the Idlib Province, with the assistance of Russian air forces. At least 1,500 civilians have been killed in Idlib since the violence intensified last April.[3]

The UN reported on Wednesday that approximately 390,000 people, 80% of them being women and children, had already fled their homes in the Idlib and Aleppo regions since 1 December. A further 400,000 were displaced between April and August.[4]