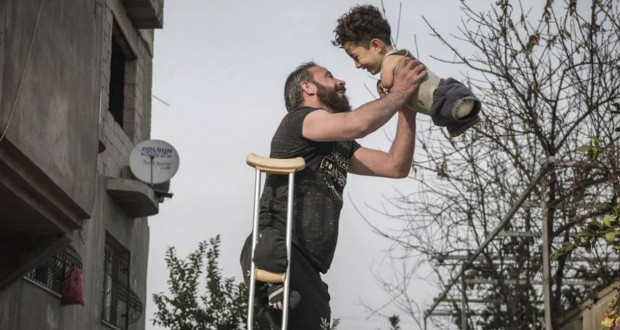 Surpassing a striking set of photographs, an arresting image of a Syrian father and son was declared overall winner of the Sienna International Photo Awards (SIPA). The prestigious award considered tens of thousands of photos from 163 countries across the globe.[1]

The winner of the contest is Mehmet Aslan, a Turkish photographer. He captured the moment a father – whose leg had been dismembered in a bomb blast in Syria – held his disabled son aloft.

One of the judges commented: “I have become quite tough over the years in my career, witnessing much suffering and covering deeply disturbing stories. I am emotionally strong but this photo made my heart jump. The sheer horror of their hardship was captured, whilst the photographer pressed the shutter in that decisive moment – one of the most beautiful moments two people can share. When nothing around you matters, the world stands still and all you feel is love and joy.”[2]

Manzur al-Nazzai is the Syrian father in the heartbreaking picture. He was walking through a market in Idlib, Syria, when it was bombed. As a result, he lost his right leg. His son, Mustafa, is a more subtle victim of the decade long brutal war. He was born with a congenital condition called tetra-amelia, such that he has no limbs. His condition was caused by the medication his mother was compelled to take after being a victim of a nerve gas attack attributed to Assad forces.[3]

Mustafa, aged just 5, needs constant medical attention. He will also need electronic prosthesis, which are certainly not present in Syria and not yet available in Turkey. The family remains largely dependent on charity, and currently lives in southern Turkey on the border with Syria.

Speaking to the Washington Post, Mustafa’s father said: “I swear I’ve gone from one hospital to another. There isn’t a town where I haven’t asked about this, but nothing has come of it.”[4]

However, Mustafa’s mother hopes the raised awareness of their son’s desperate situation will allow him to gain the medical attention he needs.

In a statement, Zeynab, the young boy’s mother, said: “We’ve tried for years to get our voices heard by anyone who would listen, to help with his treatment. We’d give anything to give him a better life.”[5]

How awful the tyrant that oppressed you. How sinful the world that neglected you. How inspiring the spirit inside of you.

A Syrian refugee father and son photographed by Mehmet Aslan. This is the photo of the year at the Siena International 2021. pic.twitter.com/VRfHS3Uoyf