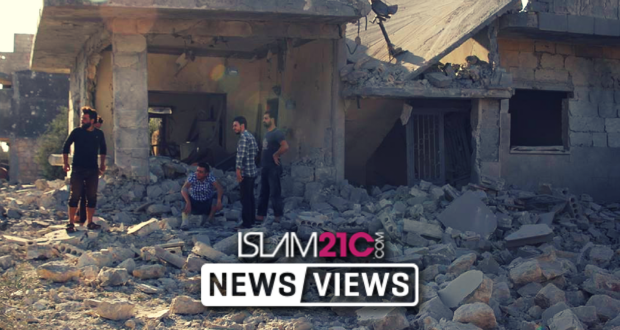 Syrian Hospitals shut down, scores killed as Daraa is “burnt to the ground”

Air strikes have put three hospitals out of service in rebel-held Daraa as Assad forces and their allies continue a major assault against the city.

At least 33 people have been killed in the violence this week including 24 civilians, of which over half where women and children,[1] as the Assad regime shell the towns of Daraa for the ninth consecutive day.[2]

Volunteer group White Helmets spokesperson Amer Abazeid told Al Jazeera that in total at least 90 people had been killed since the assault began on the 19th of June, but added that the death toll “in reality is much larger.”[3]

Another paramedic on the ground told Al Jazeera: “Daraa has been completely burnt to the ground” as he described the on-going air raids this week. [5]

The Syrian Observatory for Human Rights reported that the hospital in Saida was shut down after pro-government warplanes dropped bombs on the town in the dead of night.[6]

Russian bombers where spotted shelling the hospital in Musayfira, damaging the structure and forcing it to shut down. Subsequent Russian airstrikes also hit Jizah hospital according to the human rights group.

The previously peaceful region has recently been thrown into violence as pro-regime forces have moved to retake the area. The region in the south west of Syria has borders with Jordan and the Golan Heights, currently under illegal occupation by the Israeli army.

Pro-regime media outlets raced to compare the bloody onslaught to a type of football game, dubbing it the (Russian) “World Cup in the South of Syria” and expecting that it ends with a win to forces loyal to Bashar al-Assad “before the final whistle”. [7]

For almost a year, the provinces of Daraa and Quennitra had previously enjoyed relative calm due to the “de-escalation zone” agreed upon by Turkey, Russia and Iran in 2017.[8]

However recent military action from the Russian and Assad regime have violated the de-escalation zone agreement causing the death and forced displacement of civilians who sought refuge from the conflict in those areas.[9]

Despite corroborative eyewitness accounts, the Assad and Russian forces have denied targeting hospitals or civilians.

Yet, UN war crimes investigators have slammed the pro-regime forces for systematically targeting and destroying medical facilities in violation of international law, as well as intentionally killing medical personnel.

The United Nations has also warned that urgent humanitarian assistance will be needed on the southern Syrian borders. An estimated 70,000 people have been displaced by the fighting over the past week alone.[10]

Meanwhile the plight of those fleeing the violence grows even more desperate as the Jordanian government says that it will no longer permit refugees into the country. The Kingdom has stated that its financial resources had already been stretched thin to cater for the 1.3 million Syrians hosted in Jordan since Assad’s forces violently cracked down on peaceful protests in 2011 entering the country into a protracted civil war.[11]

The build-up of refugees on the borders threatens to put those communities, their negligible infrastructure and dangerously limited resources at serious risk of being overwhelmed.

Last week the UNHCR Chief urged the world to show “solidarity with refugees and with the communities that welcome them” in a statement marking World Refugee Day.[12]

Yet as the conflict churns up even more victims, the hope for refuge available to those fleeing the violence steadily dwindles.