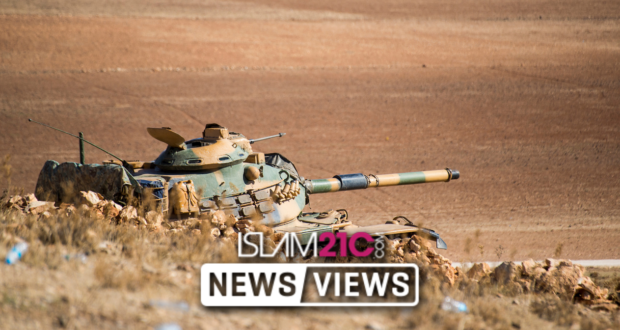 Syrian military units have entered the northern border region of Manbij currently controlled by Kurdish units of the YPG and SDF.

According to Al Jazeera and Turkey’s Anadolu Agency, tanks, armoured vehicles and trucks carrying military equipment arrived in the countryside village of Arimah today, which is 25km west of Manbij. [1] [2]

The move comes after US president Donald Trump unexpectedly announced a withdrawal of US forces in the region, and Turkish president Erdogan’s announcement that the Turkish military would launch an offensive east of the Euphrates.

Turkish-backed Free Syrian Army units have also been dispatched to the front line that separates Kurdish controlled Manbij in the east and the Turkish-FSA controlled Afrin region in the west.

Abu Yazan, a commander of the Hamza division of the FSA, said that “our units headed out to contact regions occupied by YPG/PKK terrorists” adding that “we will liberate Manbij by sweeping away terrorists from the area.” [3]

Turkish foreign minister, Mevlut Cavusoglu, on Tuesday reiterated that Turkey will go ahead with the planned offensive, denying claims that Ankara and Washington had agreed to delay the campaign.

Cavusoglu also stressed that the withdrawal of US troops would not serve to benefit the YPG and SDF.

“We’ve clearly conveyed that the process should not serve the separatist agenda of the PYD/YPG” the foreign minister said, adding further that Turkey has the power and ability to defeat both ISIS and the YPG. [4]

On Monday, Erdogan and Trump discussed the US troop withdrawal over the phone and the new campaign aimed at defeating ISIS and the YPG.

“I just had a long and productive call with President @RT_Erdogan of Turkey. We discussed ISIS, our mutual involvement in Syria, & the slow & highly coordinated pullout of U.S. troops from the area. After many years they are coming home. We also discussed heavily expanded Trade”

In response, Erdogan said “I had a productive call with (Donald Trump) today, in which we agreed to strengthen our coordination on a range of issues, including our trade relations and the developments in Syria.” [6]

Turkish and US troops began joint patrols in the countryside outside the city of Manbij in November that aimed at preventing clashes between Turkey and the YPG.

Turkey has regarded the YPG, PYD and the SDF as terrorist groups and an offshoot of the PKK, the Kurdish insurgent group that has been declared a terrorist group by the EU, UN and western nations.