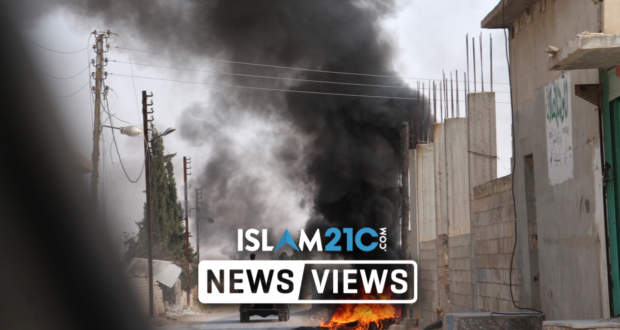 Airstrikes in north-west Syria have killed at least 70 people, mainly in a crowded market area. More than 100 others have been wounded in the airstrikes.

This is the largest massacre to be carried out in the Maaret al-Numan area since the start of the escalation in late April, according to SOHR.

Whilst searching for bodies under the rubble, a rescuer from the White Helmets, Abdul Rahman al Yasser, said:

“Bodies are lying on the streets. May God take revenge on (Russian President Vladimir) Putin and (Syrian President Bashar Assad) for their crimes.”

It is believed that the death toll could significantly rise as many of those injured are in a critical state, whilst some others are believed to still be trapped under the rubble formed by the airstrikes.

In addition, Amir Al Bunni, a father of two who was a White Helmets volunteer was also killed in the airstrikes.

“While the world is waking up to life, Amir was killed while waking up to devastating airstrikes on Maarat AlNuman.”

Amir rejoined the White Helmets’ team in northwestern #Syria after being forcibly displaced from his hometown in Wester #Ghouta, Wadi Barada. pic.twitter.com/7JOEDAGzza

Anas al Dyab was also killed in an attack, a citizen journalist working with AFP as well as a volunteer for the White Helmets.

The White Helmets have lost 266 martyrs until yesterday, after losing Anas Al-dyab to Russian triple airstrikes. Today, Amir joins what seems to be an endless number of fallen heroes to be the 267th. pic.twitter.com/boaVvA7drB

Last September, following negotiations, both Turkey and Russia agreed that Idlib would continue to remain as part of a de-escalation zone in which any acts of aggression would not be permitted.

However, the Syrian regime has repeatedly gone against the terms of the agreement and ceasefire. It has, instead, launched regular attacks within the de-escalation zone.

Rescuers have claimed that recent airstrikes have killed hundreds of civilians. Residential areas, as well as crowded marketplaces, have become the usual targets of the onslaught being carried out by the Syrian regime and Russia.

Both Russia and the Syrian regime claim to be allegedly fighting “al-Qaeda-inspired militants” and thus, deny accusations of indiscriminate bombing of civilian areas. However, civilians and activists have claimed otherwise.