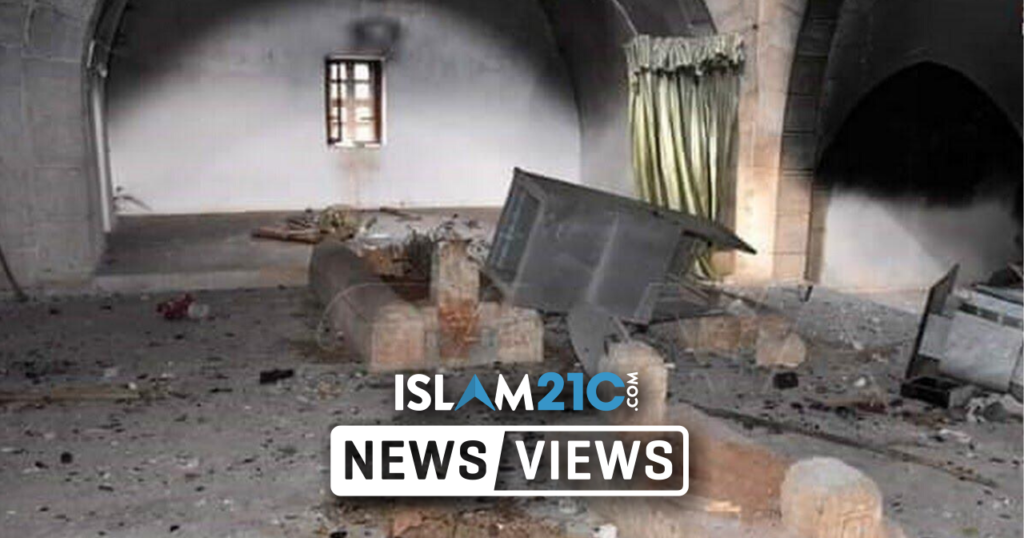 The harrowing stories and images of the catastrophic butchery happening in Syria are clear. As the oppression, persecution, and bloodshed by a tyrannical regime and its allies continues, it is clear that no one is safe under the criminal regime of Assad – not even the dead.

Earlier this week, footage emerged showing pro-Assad militias supported by Iran raiding and desecrating a grave believed to be that of the Umayyad caliph Umar ibn Abd al-Aziz in the north-western Idlib province, removing his remains buried inside. [1]

The video footage posted on pro-regime social media pages on Tuesday showed pro-Assad militias exhuming the grave in the town of Deir Sharqi near the city of Ma’arrat al-Nu’man.

Another video showed the desecrated grave opened and emptied. No information was available about the location to which the buried remains were moved.

In February, regime forces set fire to the area around the shrine when they took control of the town, causing material damage. [2]

Umar ibn Abd al-Aziz was the eighth Caliph of the Umayyad Caliphate. His great grandfather was the great Umar ibn al-Khattab (raḍiy Allāhu ʿanhu), the second Muslim caliph and a companion of the Prophet Muhammad (sall Allāhu ʿalayhi wa sallam).

Umar ibn Abd al-Aziz was a great reformer and considered a mujaddid (Islamic reviver). According to many scholars and historians, he was the first of the revivalists that appear every one hundred years according to the Messenger (sall Allāhu ʿalayhi wa sallam).

Iran has sent thousands of militias to Syria to help support and fight alongside the Assad regime. This included recruiting and sending child refugees from Afghanistan living in Iran to fight in Syria in support of Bashar al-Assad.

Children as young as the age of 14 years have been recruited to fight in support of the Syrian regime. An example of this can be seen in the Fatemiyoun Brigade, an Afghan Shia militia backed by Iran. The group fights according to Iranian officer commands and is equipped, trained, and funded by Iran’s Islamic Revolutionary Guards Corps (IRGC). [3]

The Fatemiyoun Brigade alone has a staggering 12,000 – 14,000 fighters, according to a previous deputy commander. [4] Under international criminal law, enlisting or conscripting children under the age of 15 to partake in conflict is a war crime.

In recent months, tens of thousands of innocent civilians fled the Idlib province in Syria after airstrikes and bombings intensified by the Russia-backed regime forces.

May Allāh (subḥānahu wa taʿālā) have mercy on Umar bin Abd al-Aziz. Āmīn. We also ask Allāh (subḥānahu wa taʿālā) to ease the suffering of the people of Syria and end the brutal Assad regime. Āmīn.