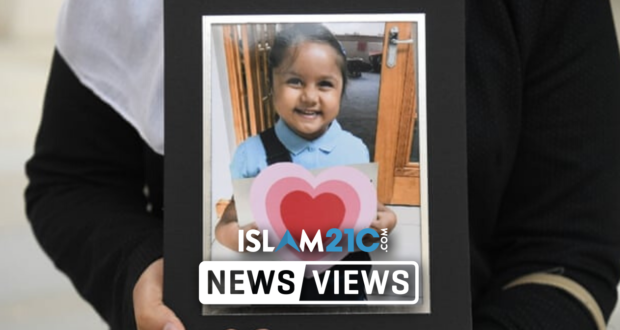 Mohammed Raqeeb and Shelina Begum, parents of 5-year-old Tafida Raqeeb, were told by UK doctors that their daughter would not survive off a ventilator and must be allowed to die.

By the permission of Allāh, Tafida Raqeeb, who suffered from an arteriovenous malformation that caused her veins and arteries to become abnormally tangled at the back of her brain, is now out of intensive care at a hospital in Italy. [1]

“The doctors in London told the court that Tafida would die if she was taken off the ventilator.”

“But she didn’t die and now Tafida is being gradually weaned off the ventilator.” 1

Begum, a solicitor by trade, was locked in a historic court case fighting for her daughter’s life after doctors at the Royal London Hospital deemed her daughter’s condition to be “end of life”.

In October 2019, the local NHS trust’s bosses’ asked the High Court for permission to remove Tafida’s breathing tube and allow her to die, as they said it was in her best interests for her to be taken off life support because she had “no awareness or prospect of recovering”. However, in a landmark victory, the judge ruled against the doctors, instead agreeing that Tafida should be treated away from the UK and allowing her brain more time to heal. [2]

This was the first time that a UK court had allowed a patient to be taken abroad against the wishes of healthcare executives. After three months of treatment in the Gaslini Children’s Hospital in Genoa, Italy, the initial medical opinion according to some experts involved in the case was proven to be “wrong” as Tafida now spends around 3 hours a day off a ventilator, breathing independently without support.

“Tafida is proving that the medical opinion in England and her prognosis was wrong.”

“In fact, she continues to improve and in the following months we hope to say more about how she is doing.’’

Tafida spent much of 2019 in hospital after her condition worsened in February last year, causing a massive bleed. But Dr Andrea Moscatelli, who is caring for Tafia, revealed that “Tafida no longer needs intensive care,” and that after 12 weeks she is “able to breathe on her own.”

Following a programme agreed with the High Court, doctors were able to drain the fluid from Tafida’s brain in addition to carrying out a tracheotomy to assist her breathing, and another procedure to aid her eating.

“She has been stabilised from the neurological point of view and as a result her breathing has improved.”

“The little girl is able to breathe on her own.”

Dr Moscatelli added that the procedures would hopefully prevent any future complications so that she is able to return home to London.

“She can now move onto the next stage of treatment, which is not so intense, with the ultimate objective being able to return her home to her family.”

Her father, Mohammed Raqeeb, was in the UK watching his daughter via a video call being moved from the intensive care unit to a nearby rehab unit. He acknowledged that there is “still a long way to go” but that his daughter is “going in the right direction”.

“The medical staff put Tafida on a buggy which means that, at last, she can be moved outside which was always our dream for her.”

In the new unit, Tafida will receive the most advanced rehabilitation techniques and hydrotherapy in order to get her muscles to move again. The Gaslini Children’s Hospital even has its own beach, which could mean that Tafida will be able to feel the water on her toes once again.

“For nearly a year she has been cooped up in a room. Now she is in a buggy, we will be able to take her outdoors and stimulate her brain.”

Furthermore, many charities started campaigns to raise money for her life saving treatment. Of them, crowd-funding platform Muslim Giving was one of the many platforms used to raise money for Tafida’s treatment abroad, which reportedly raised £24,741.20.

“Today is an extremely special day for us because Tafida is finally out of intensive care. I would also like to say that the opinion expressed by British doctors before the high court and the prognosis made has been proven incorrect. We should be able to give you good news in the coming months.” [3]

Is her case “futile”?

This case from early on has suffered from an unfortunate lack of subtlety, with the trust coming under fire for recklessly and absurdly trying to argue through the courts that the Muslimness of the family in and of itself should render them incapable of understanding the best interests for the girl.[4]

All those involved would benefit from separating facts known with certainty on the one hand, and subjective theories and inherited policies and procedures on the other hand, as well as the consequences of different worldviews on decision making—a post-Protestant secularist, materialist one and an Islamic one, for example.

Cases like these are somewhat uncharted territory, and any claim about the efficacy of a particular treatment, or the “interests” of a sick or dying person, is speculative at best. This is how science works, and it is important not to get dogmatic over speculative matters, especially when communicating across paradigms built on differing philosophical foundations.

2020-01-09
Hamza Saleem
Previous: US vs Iran: The Need for Balance
Next: Man deemed the “hero of education” by the Afghan Ministry of Education

Coronavirus: Outbreak spreads selflessness and unity all over the country