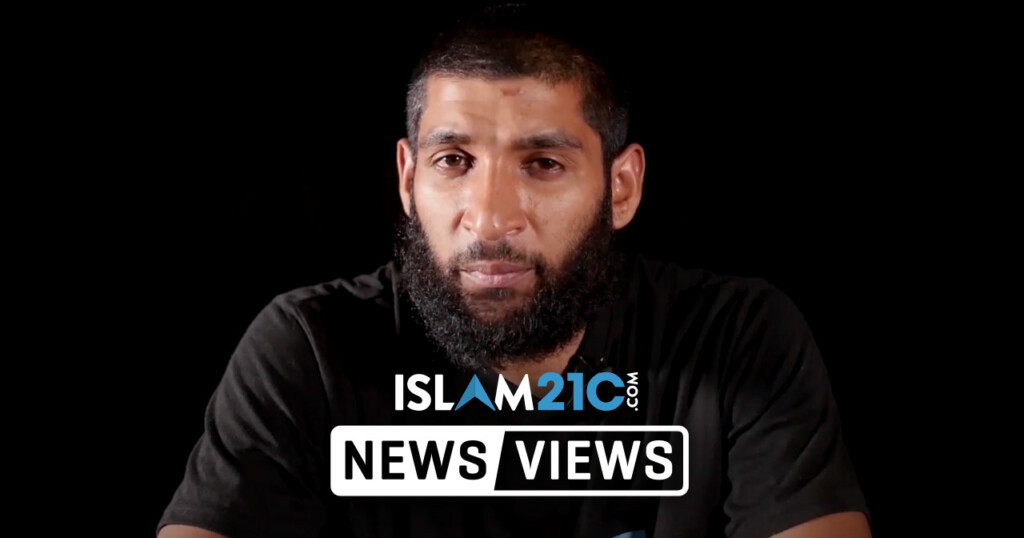 The family of the well-known humanitarian worker Tauqir “Tox” Sharif, also known as Abu Hussam al-Britani, have today released a video in which Tox is seen describing the torture he allegedly faced whilst recently detained by Hay’at Tahrir al-Sham (HTS) in Idlib, Syria.

In the video, filmed before Tox was re-arrested on 11th August, Tox describes his experience in prison just a few weeks earlier and how he endured a torture tactic called ‘The Tyre’, which involves being restrained and lashed on the feet and legs. In what makes distressing viewing, Tox explained:

“My hands were handcuffed behind my back and a tyre was squeezed over my knees and up to my waist, and a metal bar was placed between my handcuffed arms and the tyre. At this point, I was flipped over so my head was basically bent to the side and touching the concrete floor, and my feet were in the air.”[1]

Tox was then allegedly whipped with a thick vehicle belt on his feet and legs for roughly ten minutes as the interrogator sought information of which Tox explained he had no knowledge. Tox recalls that he received between eight to ten lashes as he faded in and out of consciousness while repeatedly reciting verses of the Qur’ān amidst the “excruciating pain”.

“When they took me out of the tyre, I couldn’t walk properly because of the pain at the bottom of my feet. It was like I had been standing on hot coals.”

Tox mentions that he later raised the matter with an HTS supervisor and was told that it was “halal” and they had a fatwa to mete out such treatment.

The use of this tactic is notorious with the Assad regime,[2] and Tox described his sadness in finding that his own Muslim brothers would resort to such measures:

“It is hard to believe that an organisation engaged in a bitter fight for survival against Assad’s forces would resort to the same tactics against as their enemies. Over the past weeks I have received calls and messages from Syrians on the ground who have complained about this treatment.”

“I’ve also heard from HTS who have said that they don’t torture and that it is against Islamic principles to do so. They need to prove this by taking the matter very seriously and ensuring that prisoners’ rights are protected and abusers held to account.”[3]

Tox was initially apprehended by HTS forces on 22nd June earlier this year. This prompted an immediate outcry calling for his immediate release, or at the very least for clarity over what charges he was facing, as well as for due process to be followed.[4] HTS later explained that Tox was being investigated for “mismanagement of humanitarian funds and its use towards projects that sow sedition and division”, charges that his family strongly deny.

Tox was eventually released on bail on 15th July under strict conditions that prevented him from discussing the ongoing case against him. His release was met with widespread celebrations from his supporters, many of which benefit directly from the humanitarian operations run by him and his wife, ranging from schools and refugee camps to field hospitals.[5]

However, earlier this month, Tox was re-arrested whilst attending court to register his solicitor’s details. It is said that he came across one of his interrogators who had allegedly tortured him during his detention, and challenged him on the Islamic grounds for such treatment. Tox’s wife, Raquell Hayden-Best, explained:

“One of the interrogators who mistreated him in prison came onto him and recognised him, and Tauqir asked him if it was right what you did to me. The [interrogator] said that it wasn’t wrong and it turned into a fight. The guy went to hit Tauqir. Tauqir didn’t hit him and after he came outside the guy ran after him shouting and he told me to go.”[6]

Tox was promptly re-arrested along with his driver, and has not been heard from since. Following Tox’s arrest, American journalist Bilal Abdul Kareem led calls for his release or further information, before Abdul Kareem himself was arrested days later.[7] In response, Moazzam Begg wrote:

“The Muslim world has very few journalists like Bilal Abdul Kareem. His presence in Idlib should be a source of pride for HTS authorities. He should be receiving accolades and prizes for what he has done.”

“Bilal is not just a journalist. He is the conscience of what’s left of the opposition. HTS may end up accusing Bilal of fomenting sedition, but his real crime is exposing torture within their ranks. The cruel irony is that he may be getting tortured himself.”[8]

The family of Tox Sharif have been reaching out to HTS and had threatened to release information of their alleged torture tactics if no response was forthcoming, which has resulted in the sharing of the video. In a statement, the family of Tox Sharif called for the immediate release of Tox and his driver, as well as Bilal Abdul Kareem, who have been “without access to any legal advice, medical assistance or family contact.”

“We further express our deep concern regarding incidents of torture that are taking place in northern Syria, including that of our son.”

“It is now necessary for the relevant authorities to ensure no further torture is administered and all prisoner rights are codified to prevent further mistrust and abuse. It is incumbent upon the authorities to hold to account those who have abused their power and further subjected the Syrian people to hardship.”[9]

Responding to the allegations, a spokesman from HTS denied all claims, saying:

“There is no torture. Originally the revolution was erected against injustice, tyranny, violation of rights and insulting of dignity… so how can there be torture? What is there is an arrest and follow-up until the court’s ruling.”[10]