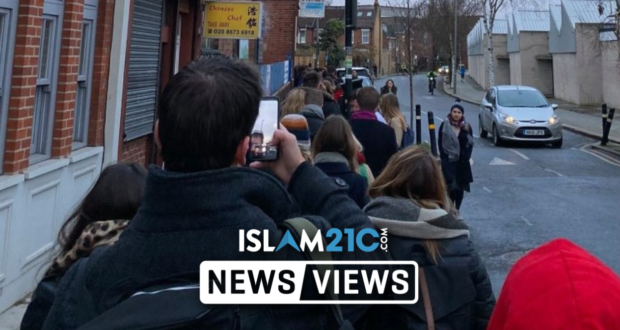 The Election of a Generation sees ‘longest queues ever’

Today’s General Election dubbed ‘The Election of a Generation’ sees the ‘longest queues ever’ as people are seen to be standing in long lines around blocks to cast their vote. [1]

The queues at the polling stations today only further emphasise the significance of this general election. Polling stations have only been open for a few hours, yet massive queues of eager people can be seen across the country. 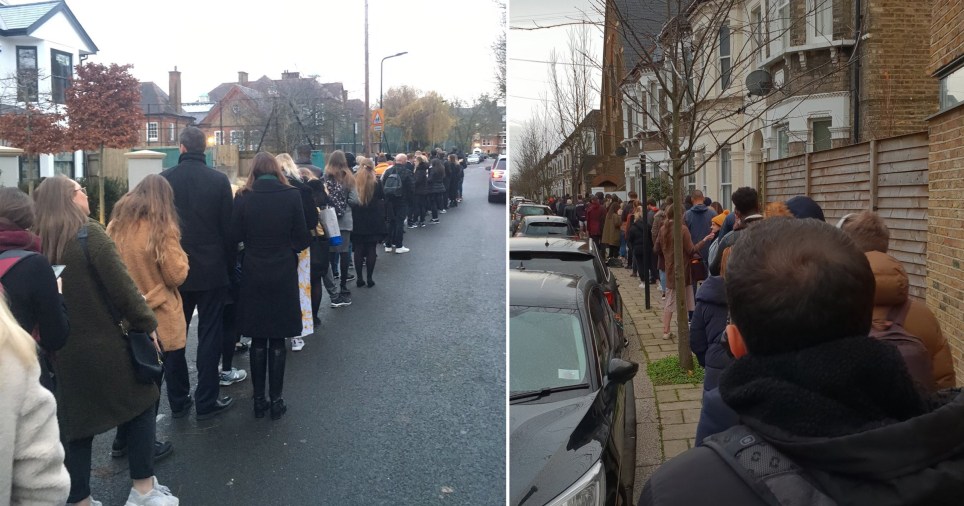 The deputy editor of The Times, Steven Swinford, posted a picture of a ‘100 plus’ queue in the marginal seat of Battersea, where Labour gained from the Conservatives by a margin of 2,416 votes in 2017.

Swinford tweeted: ‘Big queue of 100+ people ahead of me at the polling station in marginal Battersea There’s 50 odd people behind me too.’ 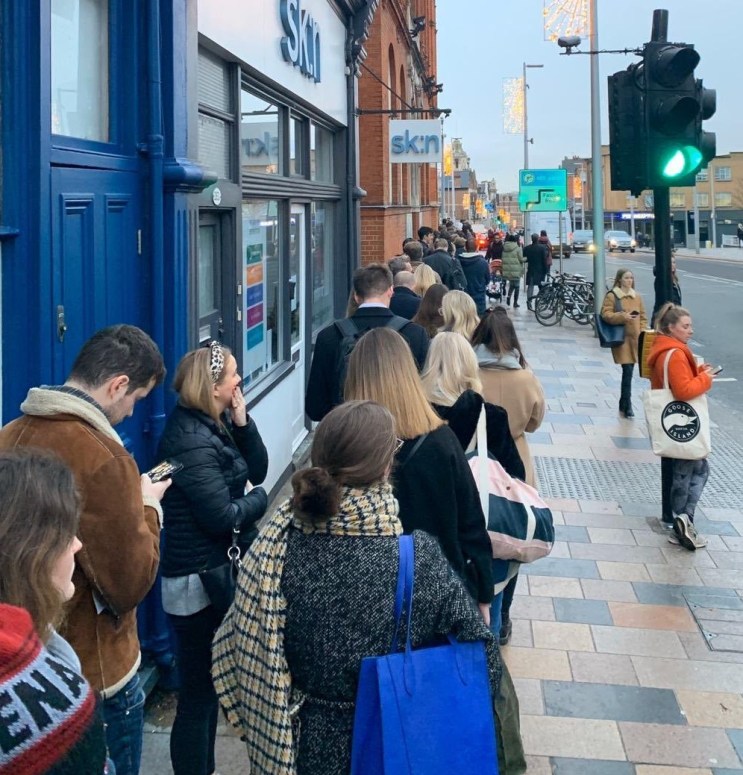 Another eager voter, Martin Archer said he’s been waiting 45 minutes in a huge queue in south London, and that he’s not even close to the front. Martin is voting in the safe Labour seat of Streatham. He tweeted: ‘I’ve never seen such queues at the polling station before #vote’

In addition, many voters that took to social media this morning have said that the lines are ‘full of young people’.

Another voter, Kelly Molloy tweeted: ‘The biggest queue I’ve ever seen at my polling station! ‘Get out there and vote people!’

She said she has never seen a queue like the one she saw at a polling station in Clapham. Labour MP Marsha de Cordova is fighting to stay as an MP in a tight marginal with the Tories in the constituency. 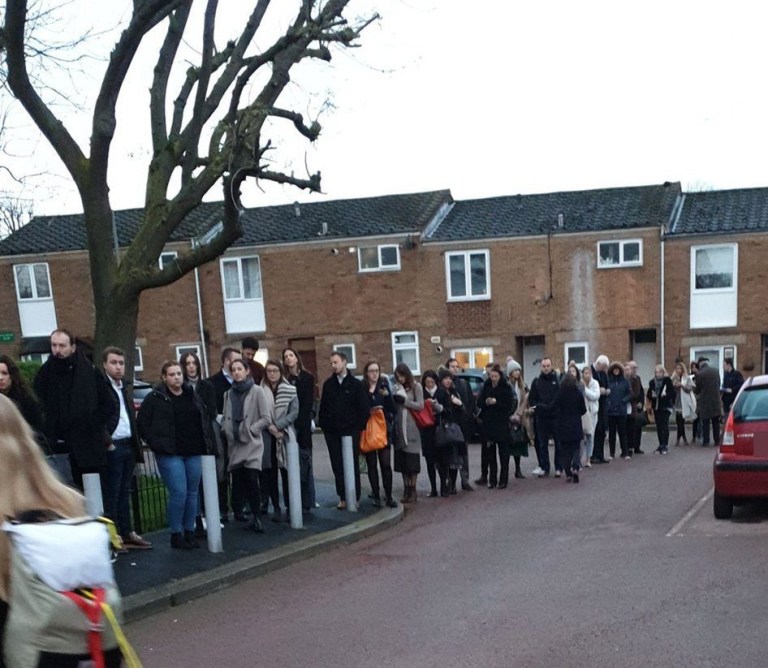 The past few years in the UK has seen several political issues debated, including Brexit, the NHS, crime, racist and Islamophobic counter-terrorism policies, and many other things. During these elections we have for the first time more genuine and radically different options on offer to govern the country than ever before in recent history.

“Muslims are a source of goodness and khayr for everyone and everything, wherever they are. They are the Ummah of the Final Prophet (sall Allāhu ʿalayhi wa sallam), who was sent as a mercy to all created beings.

One such opportunity for Muslims to carry out their divine obligation in the UK is in the election, as it is well known that choosing the right individuals or parties to rule a country is one of the ways of enjoining the good and forbidding the evil.”

The Sheikh further added that:

“As Muslims, we must not accept being reactionary and defensive all the time. We must not let others dictate our thinking, narratives, and agenda. This not only continually puts us on the back foot, but it forces us into an intellectually and strategically subordinate—even inferior—position of being led all the time. Allāh wants us to be leaders for all humanity and His vicegerents on earth. In the UK, the way that the Muslims are spread across constituencies means that we have more potential power than our numbers – we have the ability to ‘punch above our weight’.”

Many scholars of Islamic law have discussed the importance of voting. Many are in fact discussing whether voting is obligatory or recommended, let alone if it is forbidden. [2]

Sheikh Abdul Muhsin Al-Abād (teacher in the Prophet’s mosque for the last 35 years) was also asked about voting. The sheikh said that there is no problem in it if you are selecting the person who is better than the other. By doing so, you are following the lesser evil, an Islamic principle in fiqh. Through voting, you are playing a part in countering or removing the candidate with policies that are more harmful. The questioner then asked for a response to the people who state that this method is an innovation in the religion. The sheikh replied that this is what the people are tested with today (i.e. the reality of their situation) and it is upon them to choose the lesser harm. [3]

In addition, Sheikh Salman Al-‘Awdah (may Allāh hasten his release) issued a fatwa saying that participation in politics can be a means to ‘reducing suffering’ of Muslims. [4] Moreover, many other prominent scholars have also emphasised the importance of participating in elections. Mufti Muhammad Taqi Usmani regards political participation tantamount to personal ‘ibāda. [5] Therefore, the permissibility of voting is clear from the perspective of many scholars and one should utilise their energy in trying their best to play their part in commanding the good and forbidding the evil.

It’s also important that we are not put off by the long queues and the wet and cold weather, remember that nothing in this world comes easy and everything requires some form of effort. The long queues should in fact encourage you to go out and vote as the numbers really emphasises the importance of this general election. Regardless of the outcome of today’s elections we must try our best in the meantime and strive to encourage others to get out and vote. This world is the place of striving and the Hereafter is the place of reward or punishment, where the believers will be rewarded with Paradise and the disbelievers will be punished with Hell.

The great Islamic thinker, Syed Qutb (raḥimahu Allāhu) said that: “Islam needs patience in adversity at every step. Muslims have to be patient, resisting desire, bearing the harm inflicted by others, overcoming impediments, patiently addressing weaknesses and crookedness in other people, and going through the tests of either an easy life or hardship. Essentially, both are difficult predicaments.” [6]

Finally, remember, if you’re finishing work late tonight, do not worry, as long as you join the queue before the 10pm deadline, you will still be allowed to cast your vote.