RAMADAN MUBARAK!
Home / News / Who should you vote for? 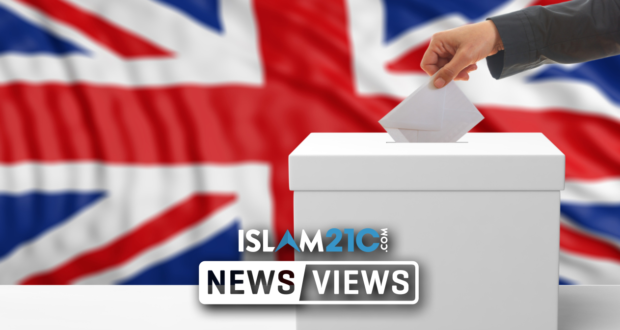 Who should you vote for?

The past few years in the UK has seen several political issues debated, including Brexit, the NHS, crime, racist and Islamophobic counter-terrorism policies, and many other things. No doubt you are asking yourself: what matters to Muslims? Which political party cares most about Muslims? Who should I vote for?

To make your life easier, MEND has produced a simple checklist to help you make maximum use of your vote in shā Allāh in an informed fashion.

MEND have written to all parties and liaised with countless candidates on the ground to see who is willing to sign up to their pledges. MEND have created an infographic that outlines a ‘league table’ exhibiting where the main political parties stand on Muslim issues.

Have a read of the infographic, think about what matters to you, and vote with your conscience. We measured each party manifesto against our Policy Pledge areas. We scored each area as follows: 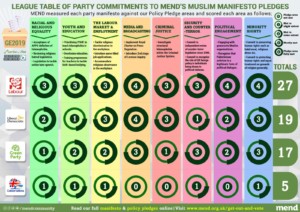 In the UK, the way that the Muslims are spread across constituencies means that we have more potential power than our numbers. Our research at MEND has shown that Muslims live in large numbers in many marginal seats – some of which were won in the past by only a few dozen votes. The Muslim vote could be the deciding vote if we are organised and proactive.

Last month, MEND released the findings of a survey concluding that up to 50 seats across the country could be heavily influenced by Muslim voters. Many have cited that 50 seats in a ‘hung parliament’ could prove critical.

Muslim voters could affect the outcome in next week’s general election in more than 30 marginal constituencies. These include Kensington in London, where the Labour candidate, Emma Dent Coad, is defending a majority of 20. Other constituencies include Dewsbury in West Yorkshire, and Pendle in Lancashire, among others.

MEND has uploaded answers from all candidates responding to the Muslim pledges survey here. Simply enter your postcode to find out which of your local candidates has agreed to what pledge.

You can read MEND’s Muslim Manifesto on what matters and view the pledges  we are asking political parties and local prospective candidates to sign up to as a means of protecting Islam and Muslims in the UK in shā Allāh. The pledges cover halal meat, the niqab, Muslims schools, Islamophobia, and much more.

We hope you find this information useful and that you definitely get out and vote next Thursday for the most Muslim-friendly party and candidates. The provided information above will aid in your decision-making in shā Allāh.

We pray that Allāh (subḥānahu wa taʿālā) protects and preserves Islam and Muslims in the UK and across the entire world. Āmīn.

2019-12-03
Sufyan Ismail
Previous: What is Wahed Invest and how can it work for you? | One-on-One Big Discussion
Next: Eh Vallah! Couple revert to Islam after watching Ertugrul