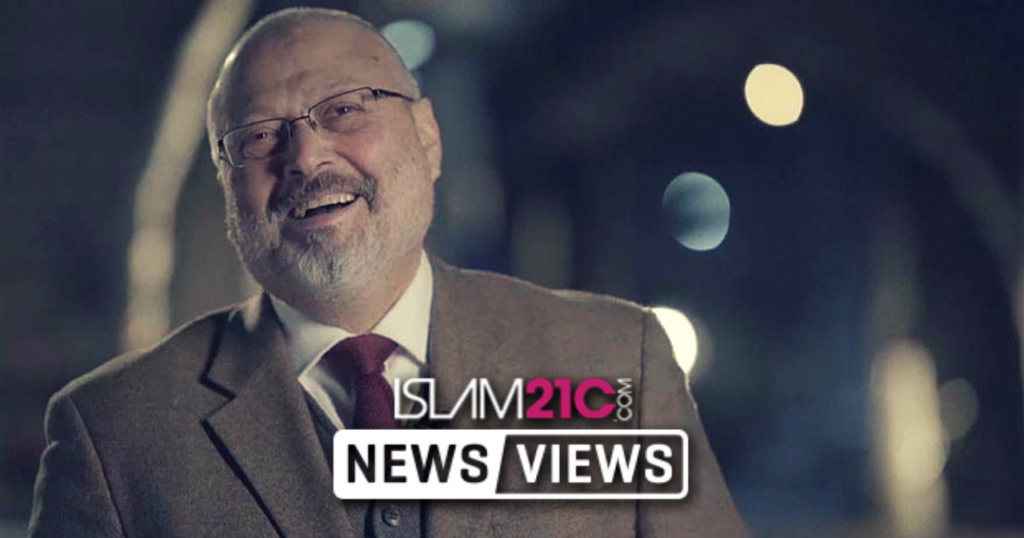 The disappearance and evident brutal murder of journalist Jamal Khashoggi continues to dominate headlines around the globe. The writer was last seen entering the Saudi consulate in Istanbul on 2nd October in order to collect paperwork to marry to his fiancé, who remained outside the consulate awaiting his return. He was never to be seen again.[1]

The story has developed almost every day since then, with Turkish media reporting on the 15-man “hit-squad” who arrived and departed Istanbul on the same day, and releasing horrific detail of what allegedly occurred to the critic of the Saudi rulers, including torture and dismemberment.

The official response from the Saudi authorities was to meet all accusations with blanket denial and refuse consulate access to Turkish investigators. As reported previously, consulate access was eventually granted, albeit after areas of the consulate were said to have been repainted, and a deep clean of the site carried out.[2]

Saudi officials, including those at the highest level in government, denied and berated all claims of his murder for the first 17 days after his disappearance, but on the 20th October, finally acknowledged that he had been killed. We look at how the story, and the narrative, has developed since then.

20th October: A statement from Saudi officials was released confirming that Jamal Khashoggi had indeed been killed at the consulate following an altercation. The statement from the Attorney General read:

“Discussions that took place between him and the persons who met him … at the Saudi consulate in Istanbul led to a brawl and a fist fight with the citizen, Jamal Khashoggi, which led to his death, may his soul rest in peace.”

“The investigations are still under way and 18 Saudi nationals have been arrested.”[3]

With the exception of Donald Trump (who found the explanation “credible”), and regional allies Egypt, the UAE and Bahrain (who were quick to praise the Saudi admission despite it arriving 17 days late), the media and governments around the world demanded a better explanation. [4]

21st October: The Saudi Arabian Foreign Minister provided a different narrative; that the killing was “murder” rather than accidental, and that those who carried it out had been “rogue killers”, acting beyond their authority. He was quoted telling Fox News:

22nd October: CNN released footage of one of the 15 members of the Saudi “hit-squad”, dressed in Jamal Khashoggi’s clothes, leaving the consulate with an unidentified man and walking to a mosque, before emerging in different clothes.[6]

Sporting a fake beard and glasses, the agent was clearly intended to resemble the murdered journalist but reports showed that his shoes did not match that of Mr Khashoggi and hence any attempts to claim it was him were subsequently aborted.

Furthermore, Turkish media released reports of an alleged Skype call from the consulate to one of the closest advisers to the Crown Prince, in which it is said that he told his men to “Bring me the head of the dog”.[7]

On the same day, Turkish investigators began searching Belgrad Forest for the body, as surveillance footage showed a consulate vehicle travelling there during the night of Khashoggi’s disappearance.

23rd October: President Erdogan addressed his parliament, having previously promised to expose the “naked truth” of the case. However little new detail was released; he confirmed much what the media had been reporting, whilst being careful to remain diplomatic towards King Salman of Saudi Arabia. He claimed that the murder was certainly premeditated and revealed that the Turkish authorities had evidence that the planning began on the 28th September itself, and that a Saudi team had carried out an exploratory search of Belgrad Forest and Yalova nearby on the day before the murder.[8]

He also called for those charged to be tried in Turkish courts, from the top to bottom:

“From now on, we expect them to uncover all those responsible for this matter from top to bottom and make them face the necessary punishments in front of the law. We have strong signs that the murder was the result of a planned operation, not a spontaneous development. In light of the current information, these questions continue to pose questions for everyone. Why have these 15 people, involved in the incident, met in Istanbul on the day of the murder? We are seeking answers to this. Who are these people receiving orders from? Why has the consulate been opened to investigation days after the murder rather than immediately after? Why have so many inconsistent statements been made while the murder was so clear? Why has the body of someone who was accepted as killed not been found yet?

“Without these questions being answered, nobody should think the issue will be closed. Intelligence and security institutions have evidence showing the murder was certainly planned. Once the evaluation of this information is completed, they will find their place in the dossiers of the prosecutor’s investigation. Pinning such a case on some intelligence and security members will not satisfy us and the international community. The conscience of humanity will only be satisfied once everybody is called into account, from those who gave the orders, to those who carried them out.” [9]

On the same day, Saudi Arabia commenced “Davos in the desert”, which had been boycotted by some senior foreign diplomats and CEOs of some of the world’s largest corporations. The Crown Prince only made a brief appearance, but was seen earlier in the day meeting the son of the slain journalist, Salah Khashoggi.[10]

It was noted Salah was banned from leaving the country and would have had little option in attending the photo-opportunity meeting, leading to heavy criticism throughout the world. One analyst told Al Jazeera:

“I think many people online looking at this on social media are saying, you know, this is the face of a son who thinks he’s shaking the hand of the man who killed his father.”

“It’s another example in this situation where some of the Saudi attempts to win the public relations war is failing.” [11]

24th October: President Donald Trump, whose views on the matter also seem to develop in different directions on a daily basis, was quoted the first time implying that the Crown Prince may have been involved:

Earlier in the day, he said: “They had a very bad original concept, it was carried out poorly and the cover-up was the worst in the history of cover-ups.”[13]

President Erdogan spoke in Ankara and mentioned that some are “uncomfortable” with evidence being shared. He did not elaborate on who he was referring to, but it clearly demonstrated the complexity of the case, with such great political ramifications at stake should the allegations be true.[14]

25th October: The Saudi public prosecutor was quoted by state media saying that the murder had indeed been premeditated.[15] On the same day, the Crown Prince chaired the first meeting of a committee to reform the intelligence services; a measure announced by his father in response to the worldwide attention on the case, but ironically led by the Crown Prince himself.

Additionally, the CIA Director Gina Haspel is said to have heard the audio tape of the gruesome killing. [16] She had travelled to Turkey to lead US efforts to understand the full picture and has since returned to the US to report back to the government. Gina reportedly briefed Donald Trump and no statement has been made yet.

26th October: The son of Jamal Khashoggi arrived in the USA from Saudi Arabia alongside his family members after previously been banned from leaving the country.[17]

Turkish President Recep Tayyip Erdogan today stated that Ankara has more documents and information. He said that it will be revealed “when the time is right”. The Turkish president also added that Khashoggi’s killer is likely to be among the 18 men arrested by Riyadh. [18] He said:

“There is no other explanation, the perpetrator is among these 18 people and if it isn’t then you have to explain who is the local collaborator”

Pressure continues to grow and it seems that the Turkish authorities are giving Saudi Arabia the opportunity to explain themselves rather than releasing the alleged audio tape and evidence.

Whilst some may have thought there would be media-fatigue some three weeks into the story, the case simply won’t go away; and all eyes remain on the monarchy to bring the real culprits to justice.