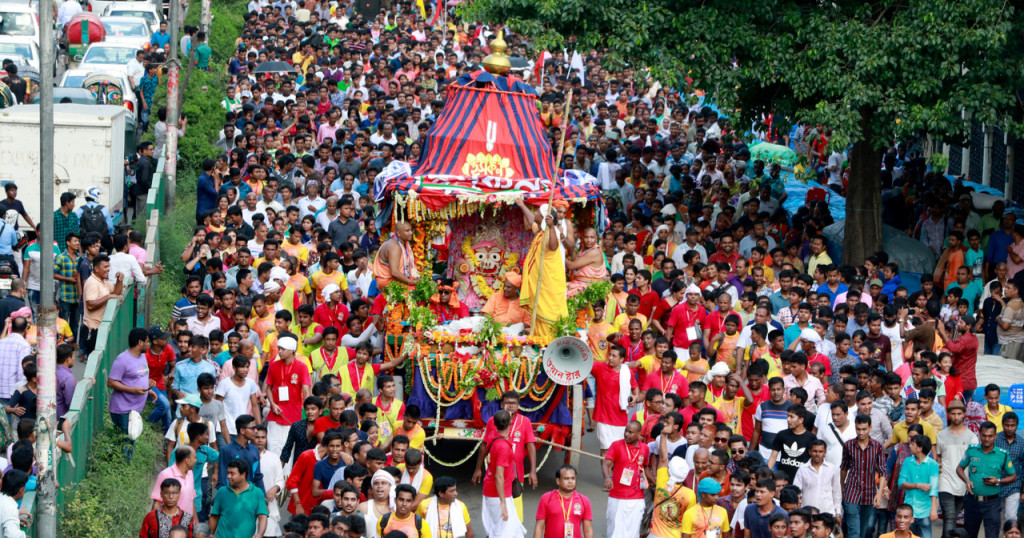 In the past week, thousands of Bangladeshi Hindus and Muslims have marched in rival protests. This rapid rise in hostilities came about after serious allegations were made that a muṣḥaf was disrespected in viral social media footage. The said video reportedly shows a copy of the Qur’an being placed at the knees of the Hindu idol Hanuman in a Cumilla temple. Seven have died in the ensuing violence, including five Muslims and two Hindus, with heavy police pushbacks causing hundreds of injuries. The escalation in tensions has come during the annual Hindu festival of Durga Puja, which pays ‘homage’ to the Hindu goddess Durga. [1] [2]

On Saturday, approximately 10,000 defenders of the Qur’an took to the streets of the Bangladeshi capital city of Dhaka. They vocally expressed their outrage at the alleged blasphemous act, which was circulated in the past week on the social media behemoth, Facebook. Moreover, in a show of force, enormous crowds formed around a number of temples throughout the city of Cumilla in the southeastern division of Chittagong.

Prime Minister Sheikh Hasina, daughter of the founding father of Bangladesh Sheikh Mujibur Rahman, seemed to gloss over the facts when she proclaimed:

“The incidents in Cumilla are being thoroughly investigated. Nobody will be spared. It doesn’t matter which religion they belong to. They will be hunted down and punished.” [3]

Hasina’s statement was by no means surprising, given her Awami League government’s increasingly staunch secular stance. For instance, in 2013 the Islamic leader and writer Abdul Qadir Mullah (raḥimahu Allāh) was hanged after a deeply flawed trial. The court made use of retroactively amended legislation which allows the government-controlled judiciary to target political opponents by invoking the painful memories of the 1971 war of independence from Pakistan.

At the time, the international criminal law barrister Toby Cadman criticised the Awami League government’s dishonest attitude towards leadership and the stifling of members of the opposition:

“The current Awami League Government has ridden roughshod over every respected legal opinion, and callously manipulated the emotional scars of the past for its own ends”. [4]

Cadman further states regarding the case of Abdul Qadir Mullah:

“Originally, Abdul Qadir Mullah was convicted and sentenced to life imprisonment. This was before the Prime Minister rushed through an amended law that would allow the Prosecution to appeal against an inadequate sentence and seek the death penalty. Simply put, the government interfered with a judicial process to ensure Mullah could be executed. Meanwhile, Sheikh Hasina promised in parliament that she would make direct representations to the judges to make sure they fully understood their new responsibilities.” [4]

While violence is not condoned, the Qur’an is a Book that demands immense respect from not only Muslims, but all of mankind as well. On the Day of Judgement, it will actually speak out either in our favour or against us, depending on our actions. Indeed, the Prophet ﷺ said,

“Cleanliness is half of faith, alḥamdulillāh fills the scale, and subḥānallāh and alḥamdulillāh fill all that is between the heavens and the Earth. Prayer is a light, charity is proof of one’s faith, patience is brightness, and the Qur’an is a proof for you or against you…” [5]

It is also important to note the various rights that the Qur’an has over us. These are primarily as follows:

Furthermore, Allah says in the Qur’an:

“This is a blessed Book which We have revealed to you so that they might reflect upon its verses and that those of understanding would be reminded.” [7]

[5] Narrated by Muslim, on the authority of Abū Mālik al-Ashʿari.