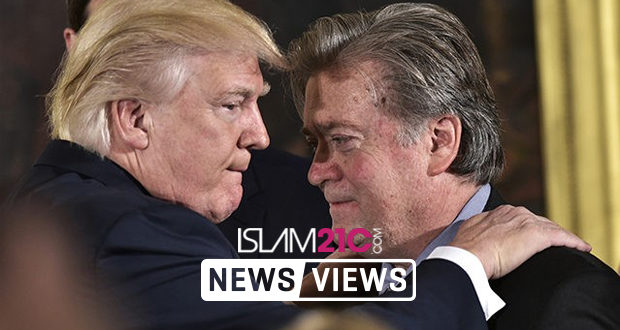 Steve Bannon, US president Donald Trump’s chief strategist and Islamophobic conspiracy theorist, has been fired seven months after his appointment.

The far-right former banker was described as a key influence on the president, after leading his successful presidential campaign last year.

He has long been viewed as an open Islamophobe and racist, with his anti-Muslim propaganda and alleged ties to white supremacists making him a controversial figure across the US political landscape, including with Republicans.

He is a seasoned promoter of conspiracy theories about Muslim threats to the “western world” used to perpetuate the Alt-Right and neoconservatives’ staple “clash of civilisations” narrative, similar to those of Douglas Murray,[1] and the Henry Jackson Society.[2]

Many have been celebrating at his departure from the white house, but others are also wary of the influence he still has on the president, who has also been accused of racism and white supremacy for many years. Yet others have expressed concern that being “removed from the shackles of formal government” would work to his and his anti-Muslim cause’s advantage.[3]

Sources close to Bannon have insisted that his exit from the white house was voluntary, claiming that he had submitted his resignation a week earlier, which was delayed by the political turmoil of the last week following the Charlottesvill protests, attacks and aftermath.

The problem was never just Steve Bannon. It was and always will be Donald Trump. https://t.co/cTBqwdwZUW

Among the senior figures in Trump’s administration that have been forced out of the white house recently include his chief of staff, Reince Priebus, former press secretary, Sean Spicer, and communications director Anthony Scaramucci.

Previous: Imagine this were your story
Next: UK terror watchdog Max Hill QC says anti-terror laws should be scrapped