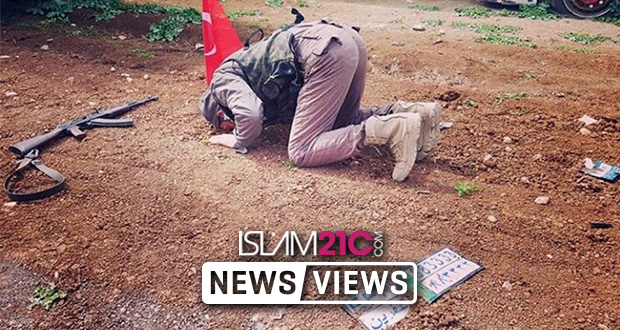 On the 58th day of Operation Olive Branch, Turkish Armed Forces (TSK) and the Free Syrian Army (FSA) have liberated the Afrin city centre – a north-western region of Syria, bordering Turkey. Afrin was one of the targets of this operation.

In a gathering to mark the 103rd anniversary of the Ottoman victory at Çanakkale over the ‘allied forces’ during World War I, the Turkish President Recep Tayyip Erdoğan announced:

“The city centre of Afrin has been completely controlled by the Free Syrian Army, supported by the Turkish Military, as of 8:30 AM [TRT/UTC+3].”

“The remaining militants and the traps that they left are being cleaned by our soldiers and the FSA. So, we won’t be seeing the rags of the terrorist organisation at the city centre of Afrin anymore. We will see the flags of peace, and currently the Turkish flag and the FSA flag is flying there.”

Afrin has been a major base for the U.S.-backed YPG militias – an offshoot of the outlawed PKK – since July 2012, when Syrian regime forces left the region to the proscribed terrorist group without putting up a fight. [1]

YPG has been reportedly using this region to launch cross-border attacks against Turkish civilians, leaving many civilians killed or seriously injured.[2] YPG (and its female version YPJ) also appears to forcibly recruit young male and female members of the households in the regions that it invades, and make them fight for them, including school children. Human Rights Watch reported that a father of a 14-year-old girl near Qamishli said:

“My daughter went to school and was taken from there by a group of YPJ […] We knew nothing about her until a YPJ commander called and informed us that she had joined YPJ.” [3]

Similar alleged violations of International Law have also been reported in Afrin, with reports of children as young as 12 being kidnapped and deployed in war zones. [4]

Earlier in 2018, the U.S. announced that it will form a 30,000 strong ‘border force’ in Syria using YPG militias. [5] This announcement angered Ankara and the FSA, as U.S. had promised that Washington’s support for the YPG militia is temporary until the defeat of Daesh in Syria.

Turkey does not want YPG in Syria, as Turkey considers YPG as an offshoot of the PKK – a listed terrorist organisation in Turkey, U.S. and EU. PKK is said to have waged a terror campaign against Turkey over more than three decades, which has killed over 40,000 people, including women and children. Furthermore, YPG is seen in the region as similar to Daesh by many in the actions they both carry out against civilians.

The Liberation of Afrin – and the surrounding areas – from the YPG is a major blow to the U.S., which reportedly had long-term plans with the YPG, that excluded the FSA. After the liberation of Afrin, YPG militants have reportedly fled to regime held areas, south of Afrin. [6]

Since the launch of Op. Olive Branch, 47 Turkish Soldiers and 157 FSA fighters have been killed during the course of this operation. Turkish military also reported that 3,567 ‘terrorists’ were ‘neutralised’ in Afrin. The Turkish Military uses the term ‘neutralised’ to imply that the militants in question were either surrendered, captured or killed.

As of 15:11 GMT, the operation had liberated 29 more villages in the north-west of Syria.

One of the aims of this operation was to clear YPG from the whole northwestern flank, to stop them linking their eastern regions with the Mediterranean Sea in the west of Syria. The operation is set to move south towards Minningh Military Airport and Tall Rif’at.

Last month, Erdogan hinted that, once the operation in North Western Syria is complete, it will move towards Manbij – East of the Euphrates River – “to hand over these territories to their rightful owners”.

Turkey’s Disaster and Emergency Management Agency (AFAD) and Turkish Red Crescent have been providing aid to those in the liberated areas. [7]

Below is a video of British Journalist Assed Baig reporting from Afrin: