The Fatih drillship of the state-owned Turkish Petroleum (TPAO) has discovered an additional 85bcm of natural gas in the Black Sea at a depth of 4,445m[1] in addition to the 320bcm announced in August of this year. [2] [3]

This new discovery means that the total amount of natural gas found in the TUNA-1 well is 405bcm, said the Turkish President Recep Tayyip Erdoğan on Saturday in a televised speech aboard the vessel. This is the largest discovery in the Black Sea. It is planned that the gas will be made available to the Turkish people by 2023. [4]

The vessel, named after the Ottoman Sultan Mehmed al-Fatih has been operating in the Black Sea 150km north of Turkey’s mainland since the 20th of July. The activities of TPAO’s deep-sea drilling fleet comprises roughly 20% of the world’s deep-sea drilling activities, said Erdoğan.[5],[6] After inspecting the fine work carried out by workers aboard Fatih, the President said: 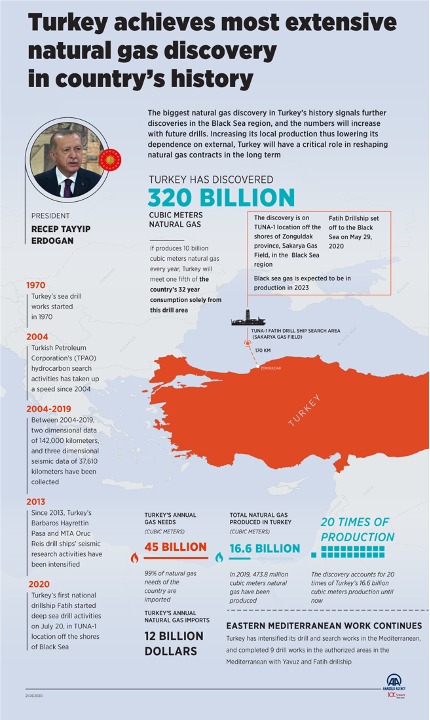 This welcome development means that Turkey can continue its efforts to wean off of its dependence on Russian energy resources – something it has been keen to accomplish in recent years. Turkey needs 45bcm of natural gas annually, 99% of which it has to import, at a cost of $12 billion.

Analysts say that this discovery could give Turkey a better bargaining chip when its contracts with Russian and Iranian gas suppliers expire. Some of the key clauses that are expected to be renegotiated are pricing, destination, and take-or-pay. The destination clause bars Turkey from reselling the imported gas to other countries. The take-or-pay clause forces Turkey to buy a certain amount of gas or else pay to meet that amount, even without consumption.

Once the well is connected to Turkey’s gas supply network in the mainland, Turkey will be in a substantially strengthened energy-independent, economic, and geopolitical position. Analysts argue that the reliance on Russian gas through part state-owned company Gazprom will not be as much of a factor in dealing with fluid regional issues, including Syria, Yemen, Libya Iran and the recent Azeri-Armenian clashes. This will allow Turkey to bolster and boost its economic growth whilst having more certainty and stability over its energy supply for the coming decades.

East Mediterranean, the EU and ‘the end of the EU’

The Turkish President discussed the issue of the European Union’s approach to Turkey on the delimitation of the Exclusive Economic Zones (EEZ) in the East Mediterranean. “If the EU does not adopt an equitable and fair approach in the East Mediterranean, it will be the official declaration of the end of the European Union (so to speak),” said the Turkish President.

The European Union and its member states are in a tough position in choosing between a principled and fair approach to resolving the issue versus blindly supporting its member state Greece at all costs.

Unlike the East Mediterranean, the EEZ in the Black Sea does not have any contentions.

Has the Caucasian conflict affected energy security for Turkey?

With the aforementioned Azeri-Armenian conflict yet to be resolved, the governments of France, the US, and Russia have failed to achieve their stated aim of finding a ‘peaceful solution’ as cosignatories of the OSCE Minsk Group, an organisation set up in 1992 to maintain peace in the volatile mountainous region of Nagorno-Karabakh. [8]In a recent remark, President Erdoğan accused the trio of nations of using ‘stalling tactics’ against Azerbaijan. [9] In another remark, the Turkish President said that the trio who are claiming to mediate are standing by Armenia and providing “weapons support”. [10]

Ethnic Armenian separatists – primarily backed by the bordering Armenian state – occupy Nagorno-Karabakh, but the area is internationally recognised as being a part of Azerbaijan. The local population largely consists of Muslim Turks and Christian Armenians.

With Azerbaijan now the biggest supplier of natural gas to Turkey, [11]the renewed conflict between the separatists and the Azeri government forces threatens the gas supply to Turkey and Europe through the Baku-Tbilisi-Ceyhan (Azerbaijan-Georgia-Turkey) pipeline route due to attacks by the separatists on the pipeline.[12]