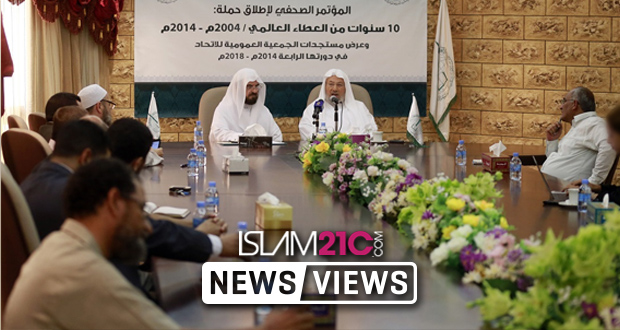 Turkey’s Foreign Ministry has expressed outrage and strong rejection of the labelling of the internationally respected scholarly body, the ‘International Union of Muslim Scholars’ as a ‘terrorist organisation’ by Saudi Arabia, the UAE, Bahrain and Egypt.[1]

In a statement, the Turkish Foreign Ministry dubbed the listing as “entirely false”, adding that issuing such decrees at a time Muslims need to unite and work together is a great mistake, feeding only the opponents of Islam.

According to the Foreign Ministry, listing an organisation that gathers scholars known to have never been complicit in terrorist activity contradicts the essence of civilised nations and all conventions of political science and knowledge.

The statement expressed Turkey’s hope that the bloc retracts this “erroneous classification” immediately, and to express the appropriate respect and reverence for the scholars of Islam and the member scholars of the organisation.

The International Union of Muslim Scholars that was legally registered in Dublin, Republic of Ireland in 2004 has since operated from Doha, Qatar and has branches in Egypt and Tunisia. The organisation that aims to gather scholars from across the world under a single, politically independent body is headed by Sheikh Yusuf Al-Qaradawi and contains some of the world’s most notable and esteemed scholars such as Sheikh Ahmad Al-Raysouni, Sheikh Ahmad Al-Khalili, Sheikh Islam Al-Basheer, Sheikh Salman Al-Auda and Sheikh Mohammed Al-Hasan Al-Diddo, amongst many others.[2]

The statement comes two days after the nations that imposed a siege on Qatar added the International Union of Scholars, the World Islamic Council and 11 individuals to its ‘terror’ list. A statement by the countries involved in Qatar’s siege said that “the two terrorist organisations are exploiting Islamic discourse to incite terrorism” adding that “the individuals on the list have carried out a number of terrorist operations with Qatar’s funding.”

Rights groups and numerous scholars have expressed similar outrage at the listing.