Turkey signs deal with the US to set up safe zones in N. Syria 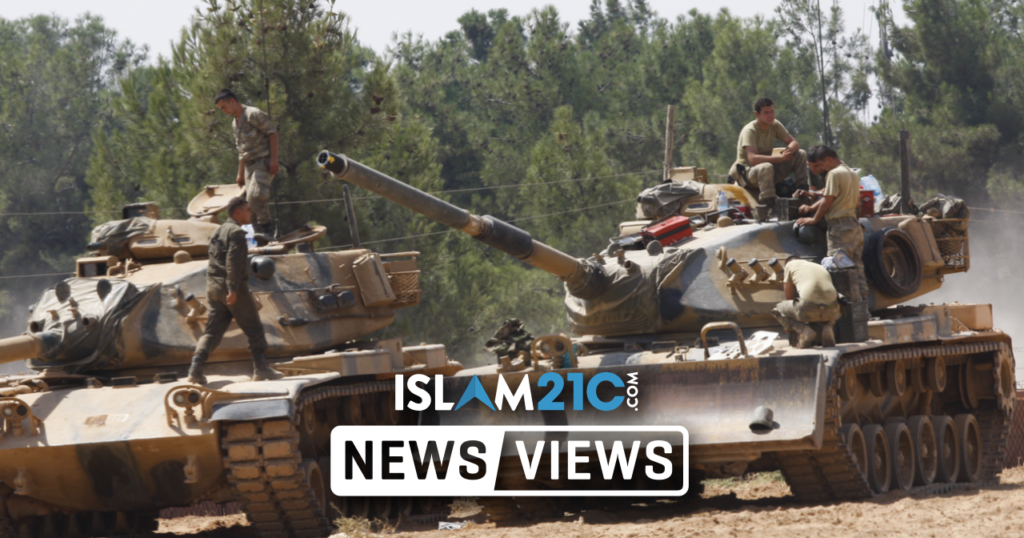 Turkey and the US have agreed to establish safe zones across northern Syria as well as to operate joint command centres that would monitor these safe zones.

The agreement was signed on Wednesday and would allow Turkish and US armed forces to establish a joint operations centre that would coordinate and manage safe zones across northern Syria, with the Turkish ministry of defence saying that the safe zones would be turned into “peace corridors.”

Northern Syria is currently under the control of the Syrian Democratic Forces (SDF), a group largely made up of the terrorist organisation YPG. The SDF is an extension of the outlawed PKK terrorist group which has been labelled as such by Turkey, the US, and the UN, and has waged a campaign of terror for over 40 years.

Due to the threats posed by the YPG, Ankara has been wanting to establish a 30-40 km safe zone along its southern border with Syria with the aim of removing the YPG and its military infrastructure such as tunnels and observation posts.

According to Turkish officials, the US agreed to the deal on the basis that Turkey will not launch an offensive against the YPG. Ankara, however, has amassed troops on the southern border and has said it is ready to launch its third operation against all terrorist elements if the deal does not work.

“Our plans, preparations, and the deployment of our units in the field are all complete. But we said we wanted to act together with our friend and ally, the United States,” Hulusi Akar, the Turkish defence minister, said in a statement.

“We expect our US friends to behave in a spirit of alliance and spirit of strategic partnership,” the defence minister said, adding that they will work to ensure peace in northern Syria, but if that is not achieved then Turkey will take the necessary steps to ensure that peace is restored.

On Sunday, Turkish president Recep Tayyip Erdogan had informed the US and its other ally Russia of its planned operation, arguing that the removal of all terrorist groups, including the YPG and Daesh, was necessary for the establishment of safe zones and the return of Syrian refugees to their homes.

“Turkey has the right to eliminate all threats against its national security,” Erdogan said, adding that “God willing, we will carry the process started with [previous offensives into Syria] to the next stage very soon.”

The buildup of Turkish troops on the southern border follows reports of the removal of concrete barriers in the border city of Akçakale, opposite the Syrian city of Tell Abyad, supposedly in preparation of a third incursion into YPG-held territory.

The Syrian regime on Thursday rejected the Turkish-US agreement on the establishment of safe zones, which would prevent the YPG terrorist organisation from asserting its control over the Arab population and would allow for the return of refugees living on the Turkish border.

The regime, however, broke a truce and ceasefire they agreed to last week in Idlib that would see the creation of a buffer zone. The regime has resumed large scale bombing of Idlib with reports of many deaths on Khan Sheikhun and other towns and cities across the besieged rebel-held province.

Syria’s eight-year civil war was born out of peaceful protests by Syrian civilians for reforms and changes in the Syrian regime. The latter’s response was one of violence and brutality, which forced the people to take up arms in defence. Over a million Syrians are trapped in Idlib province without adequate food, shelter, and medical security.

Over 500,000 people have been killed in the crackdown by the regime, with many more being displaced. The Syrian regime, with backing and support from its allies in Russia and Iran, has been able to militarily defeat opposition and rebel fighters, and are regaining territory that had been lost in previous years.