#FREEPALESTINE
Home / News / Turkey warns the US: Get your troops out of Manbij, Syria 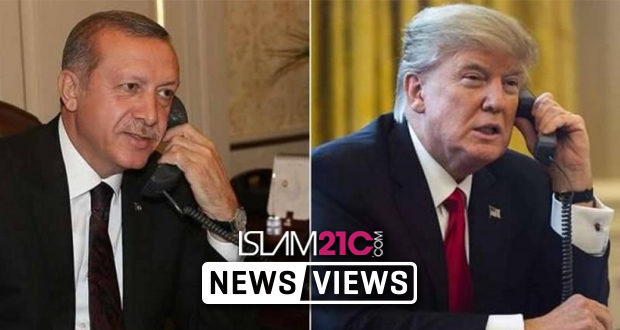 Turkey warns the US: Get your troops out of Manbij, Syria

Turkish President Recep Tayyip Erdogan told his US counterpart Donald Trump in a telephone conversation on Wednesday that the US must withdraw its troops from the northern Syrian province of Manbij, according to Turkish Foreign Minister Mevlüt Çavuşoğlu.

Speaking at a Press Conference in Istanbul, the minister added that “Turkey will not attack the Syrian regime unless it moves against it.”

Prior to President Erdogan’s conversation with Trump, Erdogan warned that his country would expand its military operation in Syria from the northern province of Afrin to include the city of Manbij, a move that could put Turkish forces in direct confrontation with the some 2,000 US troops supporting the separatist Kurdish YPG.

According to Çavuşoğlu, it is upon Washington to rebuild its trust before talking about establishing ‘safe zones’ in Syria’s north, owing to the its continued military backing of Kurdish militia and separatist groups affiliated to the US, the European Union and the PKK – which is listed as a terrorist organisation by Turkey, the US and EU. The US justifies its support to this group by claiming the latter is battling against ISIS, despite the Free Syrian Army having taken the fight to ISIS years before without such support.

The minister added that Erdogan had proposed establishing a safe zone in northern Syria  but the US had failed in its promise to stop supporting the YPG. Restoring confidence between the two sides requires Washington to take concrete steps in this regard. Some reports have suggested this is the first time in two months that President Erdogan has spoken to his NATO ‘ally’ since Trump declared Jerusalem the Capital of the Zionist State – ‘Israel’.

On Saturday, Turkey launched military operation ‘Olive Branch’ in the region of Afrin, North-Western Aleppo and in cooperation with the FSA.[1] This is the first intervention of its scale since the Syrian uprising erupted in 2011. The PKK has, however, been carrying out armed violence in Turkey’s southeast since 1984. The three-decade long conflict has claimed the lives of some 40,000 civilians. On Wednesday, a rocket reported to have been fired by the group hit the Calik Masjid in the Turkish border town of Kilis and a house, killing two and injuring 11.[2]

Social Media activists revealed that the YPG has been recycling images of damage caused by Russian airstrikes in Syria to blame Turkey of attacking civilians. This has been described as a desperate attempt to garner international support.[3] The YPG has broadly avoided confrontation with the Syrian Regime during the revolution and has been seen as willing to cooperate with anyone ready to adopt its separatist ambitions, including ‘Israel’.[4]

Turkey’s intervention is seen as a significant step in dissolving a US-led plan to split off regions from Iraq, Iran, Turkey and Syria for the creation of a Kurdish State of unreserved loyalty to the United States. In a statement released on Thursday, the YPG called on the Assad Regime to come to its defence.[5]

2018-01-26
+Editor
Previous: Fatwa on Bitcoin & Other Cryptocurrencies
Next: US diplomat quits Rohingya advisory board in protest