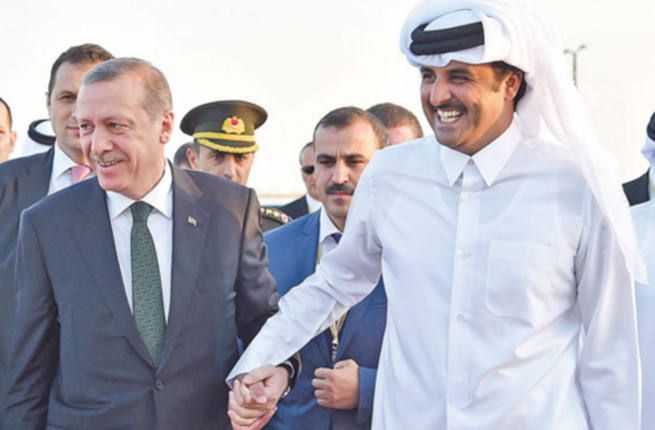 Just days after six Arab nations cut diplomatic ties with Qatar, the Turkish Parliament today responded by ratifying two deals to boost military co-operation with its long-standing ally and brotherly nation. The military deals will allow Turkish military forces to be deployed in Qatari territory and allow Turkish gendarmerie forces to train Qatari gendarmerie forces in Qatar. The two countries aim to carry out joint exercises in an effort to contribute to regional and world peace, [1] and comes after a time the tiny nation of Qatar that has long supported Muslim causes around the world finds itself isolated by its huge neighbouring monarchies.

The Turkish Parliament is set to go into recess during the period of Ramadan.

Turkey’s swift action comes after the President of Turkey and Leader of the ruling AK Party Recep Tayyip Erdogan addressed an Iftar (end of fast) gathering of AK Party deputies in the Turkish capital Ankara saying; “I want to clearly say that we disapprove of the sanctions on Qatar” referring to the ongoing row between Qatar and its’ GCC allies. He further added; “These developments, coming at a time when we need solidarity and cooperation more than ever, are no good for any country in the region.” Qatar currently hosts the largest US military base in the Middle-East containing some 11,000 US military personnel. Despite this, President Trump extraordinarily joined the list of nations accusing Qatar of supporting terrorism, [2] therefore putting the long-term presence of this base in question and increasing the small nation’s vulnerability. Qatar has long been accused of leveraging the presence of base and its importance to the US for its own political autonomy, hosting many of Egypt’s Muslim Brotherhood exiles, scholars and activists as well as members of Hamas’ senior political bureau.

Turkish presidential sources confirmed that Erdogan was leveraging His multi-lateral relationships by engaging in diplomatic efforts with;

Erdogan stressed the importance of dialogue in these situations and assured that Turkey stands by to engage in necessary effort in whatever it can. [3] He further appreciated Qatari efforts by stating; “within this framework, we appreciate the cool-headed and constructive attitude presented by Qatar. The fact that Qatar, which we know is waging an effective struggle against terrorism, is being isolated in this way cannot solve any problems. I hope that all sanctions against Qatar will be lifted as soon as possible.”

He also dispelled the very heavy accusations that have been levelled against Qatar, the latter accused of being a “terror suspect” despite supporting the democratically elected governments of Egypt, Palestine and Libya. Turkish President added;

“I’ve known them for 15 years. If such a thing existed, I would be the first president to oppose them. But I have not seen this. There is a different game being played here. We have not yet been able to determine those behind this game yet, but we need to disappoint those waiting for an opportunity to meddle in the region.” [4]

Qatar has insisted that the allegations of its neighbours are “baseless” and called for dialogue to resolve this issue. [5]