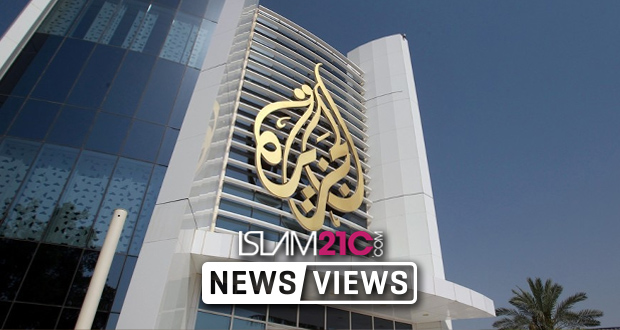 The senior security official in the United Arab Emirates (UAE) accused and attacked Al Jazeera through a number of posts on social media platform Twitter. He accused the media network of inciting the vicious gun and bomb onslaught earlier that day on a Mosque in Egypt’s North Sinai Province—an attack that resulted in the deaths of more than 235 people. General Khalfan, who used to be a police chief and is currently the head of security in the Emirates, stated:

“The alliance must bomb the machine of terrorism … the channel of ISIL, al-Qaeda and the al-Nusra front, Al Jazeera the terrorists.”

He then went on to tell his 2.42 million followers on Twitter,

“For how long will they [Al Jazeera] continue to tamper with the security of Egypt and the Arab world?”

The image was captioned the ‘Jazeera of Terror’, aiming to mock and associate Al Jazeera with those individuals and their ideologies. Ironically all four figures share extremely different views between themselves.

The Al Jazeera network has “more viewers than all other Pan-Arab news channels combined,”[2] with its English website receiving “Best Website award at the annual Online Media Awards ceremony held in London,”[3] in June 2016.

This incitement to the bombing of the network comes just days after Gulf nations—at their forefront the UAE—listed the International Union of Muslim Scholars alongside the World Islamic Council and 11 individuals, on its own ‘terror’ list.[4]

Khalfan is one of the most prolific inciters against Sheikh Yusuf al-Qaradawi, and has threatened to arrest him after the sheikh strongly condemned UAE’s decision to revoke Syrians’ visas and sending them back to Syria—possibly to persecution—for protesting outside the Syrian consulate in Dubai.[5]