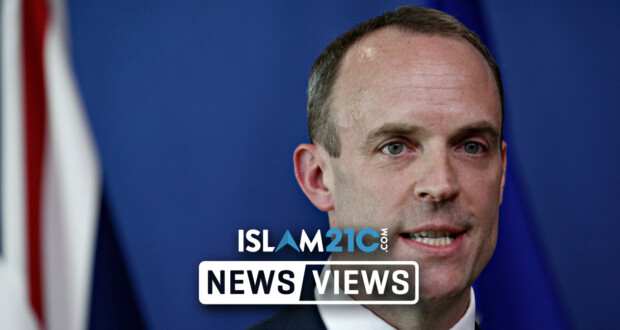 Following reports earlier this week that the Foreign Secretary Dominic Raab and the International Trade Secretary Liz Truss were introducing a bill in the House of Commons on the Uyghur issue, Raab made a lengthy statement “on the situation in Xinjiang and the Government’s response” by saying that “the nature and conditions of detention violate basic standards of human rights, and at their worst amount to torture and inhumane and degrading treatment”.[1]

In a speech delivered in the House of Commons on Tuesday, the Conservative Cabinet minister and MP for Esher and Walton said:

The evidence of the scale and the severity of the human rights violations being perpetrated in Xinjiang against the Uyghur Muslims is now far-reaching, and it paints a truly harrowing picture.

– systematic restrictions on Uyghur culture, education and indeed the practice of Islam, and the widespread use of forced labour.

The nature and conditions of detention violate basic standards of human rights, and at their worst amount to torture and inhumane and degrading treatment. Alongside widespread reports of the forced sterilisation of Uyghur women.[1]

Together with the statement, the Government announced trade measures to prevent British organisations from profiting from, or being complicit in, the human rights violations in Xinjiang.

“The UK Government is announcing a review into which UK products can be exported to Xinjiang and the introduction of financial penalties for businesses that do not comply with the Modern Slavery Act. Further measures include increasing support for UK public bodies to exclude businesses complicit in human rights violations from their supply chains. Together these measures will help UK organisations ensure that they are not contributing to the abuse of the Uyghur Muslims in Xinjiang.”[2]

The Foreign Secretary has announced a package of measures in response to growing evidence of human rights violations in Xinjiang, Chinahttps://t.co/jtXRJo08Bp pic.twitter.com/uSwgetO766

While the statement and legislation is welcomed, some are arguing that the Government is all talk and no action, with shadow Foreign Secretary Lisa Nandy saying it “amounted to tinkering around the edges”.[3]

Nandy argued that countries such as France had already taken greater steps in addressing the Chinese human rights crisis. Since July 2020, France has been surprisingly firm in its consistent calls for the Chinese Communist Party leadership to shut down Xinjiang’s detention centres and return to the Uyghurs their inalienable human rights.[4]

In a September press briefing, a spokeswoman for the French Ministry for Europe and Foreign Affairs responded to a reporter’s question on the French government seeking international observers to be allowed entry into Xinjiang to objectively document the true situation on the ground:

“Indeed, we along with our EU partners have spoken out repeatedly to strongly condemn this unacceptable situation. We have called for the closing of the internment camps in Xinjiang and the dispatch of an international mission of independent observers under the supervision of UN High Commissioner for Human Rights Michelle Bachelet to investigate on the ground and report objectively on the facts. President Macron reiterated our demand during his speech before the UN General Assembly this week. France will remain active in this regard, both in its bilateral contacts with Chinese officials and within the UN, notably before the Human Rights Council. It will continue to support this demand ahead of the upcoming EU-China dialogue on human rights, scheduled to be held by the end of the year.”[5]

Raab’s statement also covered this point of seeking China’s permission for the UN and other world bodies to send in experts. However, in a show of frustration, Raab said:

“China cannot simply refuse all access to those trusted third-party bodies who could verify the facts, and at the same time maintain a position of credible denial.” [1]

Other Cabinet members, including the Home Secretary Priti Patel, commented on the new business measures, saying that “businesses and public bodies must be more vigilant than ever before and ensure they are not inadvertently allowing forced labour in their supply chains.”

2021-01-14
Shaheer Choudhury
Previous: WhatsApp Contains Pornography – do your children have it?
Next: Condolences on the passing of Shaykh Muhammad Salah’s father