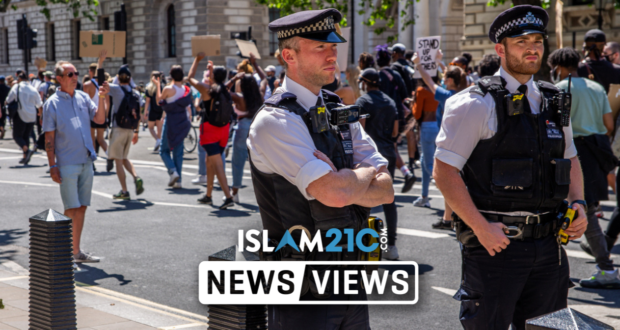 UK: Thousands attend anti-racism protests in the wake of the brutal murder of George Floyd

Thousands of people across the United Kingdom have joined anti-racism demonstrations despite lockdown restrictions. [1]

The demonstrations took place in towns and cities across the UK in the wake of the brutal murder of an unarmed black man, George Floyd in Minnesota.

‘This is the scene, right now, in central London.

'Despite the rain, thousands are standing in solidarity with the family of George Floyd’⁰⁰#BlackLivesMatter protests are taking place throughout the UK today

The protesters defied any calls to avoid mass gatherings as required under lockdown measures due to the coronavirus pandemic. Protesters held banners reading:

“There is a virus greater than Covid-19 and it’s called racism”.

For the most part of the day, protests were smooth and peaceful, however footage surfacing on social media shows violence erupt as demonstrators are forced to disperse and police officers can be seen in riot gear.

During the protest, a 29-year-old protestor, Imran Ayton told the crowd: [2]

“Institutional racism is rooted in housing, healthcare, the education system, the media, in fashion and beauty,”

“It is rooted in recruitment and employment, in politics, in policing, in immigration, and the criminal justice system.

“It is seen but you cannot see it. It is everywhere but it is nowhere … Today is the day where we say goodbye to institutional racism.”

Although the majority of protestors wore face coverings, many with gloves and some attempted to social distance, the Met Police Commissioner Dame Cressida Dick has said the protests were “unlawful”.

Sadiq Khan, the mayor of London, has praised those who protested peacefully saying:

“To the thousands of Londoners who protested peacefully today, I stand with you and I share your anger and your pain. George Floyd’s brutal killing must be a catalyst for change worldwide.

“To the tiny minority who were violent and threw glass bottles and lit flares – you endangered a safe and peaceful protest and let down this important cause.”

In recent days, dozens of videos have surfaced on social media showing police brutality during demonstrations over the death of the unarmed black man. Civil rights groups in the United States have also sued Trump over the assault on peaceful protesters near the White House on Monday. [3]

Protestors in the US have been sprayed with tear gas, shot with rubber bullets, and forcefully removed as police brutally dispersed protesters from a park to allow Trump to take a photo near a church. [4]

2020-06-06
Hamad Momin
Previous: Libyans celebrate as remaining strongholds of Haftar’s forces recaptured
Next: Stockpile your deeds before the pandemic ends