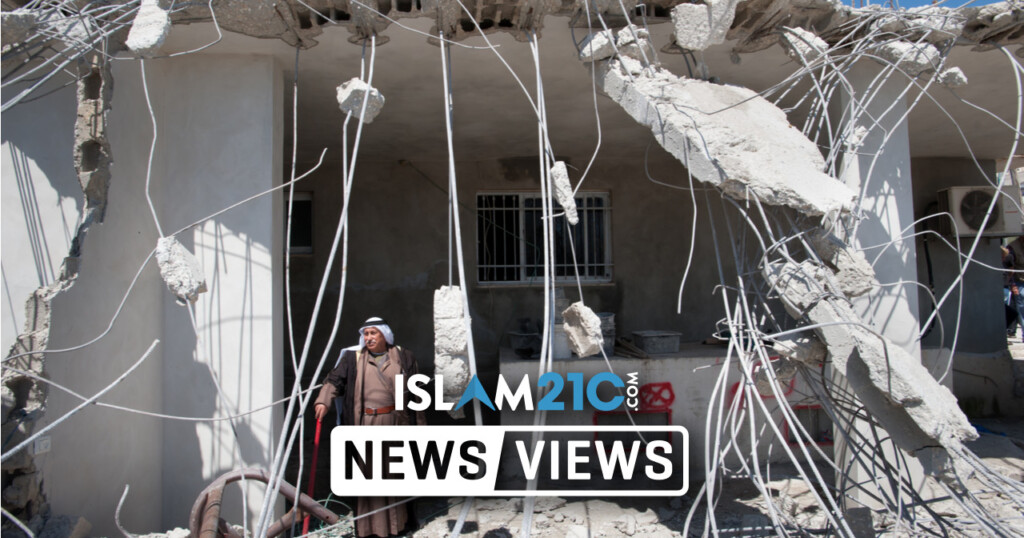 ‘Israel’ has been told to immediately stop all settlement building and related demolitions of Bedouin homes in the Jordan Valley, with a number of countries saying they are “deeply concerned at the recent repeated demolitions and confiscation of items, including of EU- and donor-funded structures carried out by Israeli authorities at Humsa Al-Baqai’a in the Jordan Valley.” [1]

The United Kingdom, Ireland, France, Estonia, and Norway have all said they are gravely troubled by the ongoing bulldozing of Bedouin settlements in the village of Humsa Al-Baqai’a, particularly due to approximately 70 people including 41 children still residing in the area.

The joint statement by the governments adds:

According to the UN, approximately 60,000 Palestinians live in the Jordan Valley – an area that has become a focal point in the battle over who controls the West Bank – yet around 90% of this land is controlled by ‘Israel’.

During the coronavirus pandemic, ‘Israel’ has restarted and advanced existing settlement programmes. The recent joint statement at the UN Security Council follows the UK government’s statement in November 2020 concerning the demolition of Humsa Al-Baqai’a.

At the time, James Cleverly, Minister for Middle East, said:

“I am seriously concerned by the demolition of Humsa Al-Baqai’a, a Bedouin village in the Occupied Palestinian Territories.”

“This act caused unnecessary suffering to many vulnerable Palestinians, including 41 children, and may impact the community’s ability to withstand Covid-19. It is also detrimental to prospects for peace.”

“2020 has seen the highest levels of demolitions of Palestinian homes and structures since 2016. I call on the Government of Israel to cease this policy, and provide Palestinians with a clear, transparent route to construction in Area C of the West Bank.” [2]

“We express our strong concern regarding the policy of demolishing residential structures of Bedouin communities who have been residing here for decades.”

“And our concern is very simple. We are here to uphold international law, including international military law which forbids demolitions of residential structures in occupied territories. It’s contrary to the obligations [of Israel] under the 4th Geneva Convention evictions or forcible transfer likewise. Here we’re talking about 100 people, of whom 40 to 50 are children. We’re in the midst of a pandemic we are in the midst of winter-time. Where do these people go facing homelessness, facing winter?” [3]

Since the inauguration of Joe Biden as US President, there has been much talk of exactly how the administration is committed to implementing a two-state solution between Palestine and ‘Israel’, yet very little has been done to substantiate this claim.

In 2020 alone, around 800 Palestinians lost their homes because of illegal demolitions. It appears that regardless of countless repeated calls to the Israeli government to stop causing such appalling and unnecessary damage to hundreds of Palestinian lives, it continues to ignore all such pleas, thus showing how coldblooded the Israeli regime truly is.