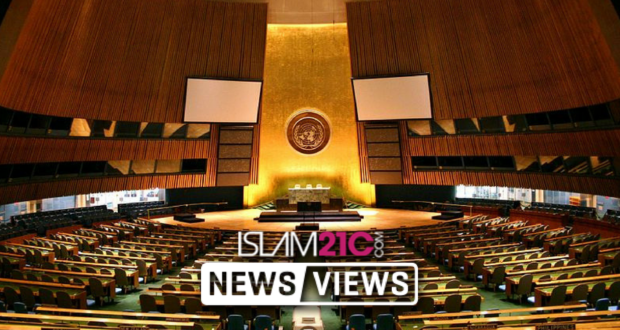 In a landslide vote, The United Nations General Assembly passed a resolution placing the blame on Israel for the violence in Gaza.

Approved on Wednesday, the resolution deplored Israel’s “excessive, disproportionate and indiscriminate”,[2] use of violence against civilians and children, calling for the “international protection” of Palestinian civilians.

With the support of 120 member states, the resolution proposed by Turkey and Algeria passed with a huge majority, following the rejection of a US backed draft blaming Hamas for Israel’s recent killings. 45 members abstained from the vote with only eight votes against.

The amendment firmly “deplores the use of any excessive, disproportionate and indiscriminate force by the Israeli forces against Palestinian civilians in the Occupied Palestinian Territory.” The statement also criticizes Israel’s use of “live ammunition against civilian protesters, including children, as well as medical personnel and journalists.”

The resolution goes on to demand an end to Israelis aggression and its contravention of the Geneva convention and international humanitarian law.[3]

The eight countries which voted against the resolution are the United States, Australia, Marshall Islands, Micronesia, Nauru, Togo, the Solomon Islands and Israel itself.

Historically, the United States has regularly played the role of advocate for Israel in the United Nations.

Arguing that the draft was ‘biased’ against Israel,[4] US Ambassador to the UN Nikki Haley proposed an amendment condemning Hamas for firing rockets. However the amendment was rejected and dismissed after failing to receive sufficient supporting votes.

Palestinian Ambassador Riyad Mansour criticized the rejected U.S. amendment as a “bad-faith attempt” to shift the focus away from “the core objective of protecting civilians and upholding international law”.

Mansour added: “We cannot remain silent in the face of the most violent crimes and human rights violations being systematically perpetrated against our people.”[5]

Since the end of March, Israel has killed 124 Palestinians and wounded almost 4,000 with the death count tragically climbing at a consistent rate.[6]

As a direct result of their wounds at least 40 Palestinians have had to have their limbs amputated due to irreparable damage caused by targeted Israeli weapons fire. [7]

For the duration Israel has been subject to constant criticism for its indiscriminate killing of children, women, unarmed civilians and medical professionals.[8] In the most recent violence Israel has used live ammunition targeting at least 40 ambulances and injuring roughly 250 paramedics.[9] Recently Israel gained international condemnation for the targeted execution of a 21-year-old nurse as she attempted to save lives.[10]

A similar resolution calling for the protection of Palestinians from Israeli aggression was previously proposed in the UN Security council.[11]

Due to a veto block by the United States the almost identical condemnation of Israeli violence proposed by Kuwait was denied by the UN Security Council in June, in spite of having the required votes.

2018-06-16
Ahmad Jomaa
Previous: Prominent figures express outrage at Tariq Ramadan’s treatment and call for due process
Next: The Description of the Prophet ﷺ