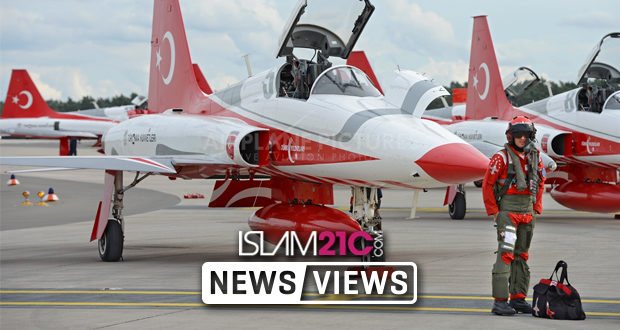 The threat was aired on official news agency SANA, amidst Turkey’s readiness to resume a version of Operation Euphrates Shield against US-backed YPG. The US has disapproved of Turkey fighting the YPG, an off-shoot of the PKK which is recognised as a terrorist organisation by Turkey, EU and US.

Declaration of intent to liberate Afrin

“These operations will continue until not a single terrorist remains along our borders, let alone 30,000 of them!” said President Recep Tayyip Erdoğan during his speech at the opening of Kazan Soda Electric Factory.

“As we did with the Euphrates Shield Operation, we will also foil the plots set up for our country in other regions. We will crush them.” He added.

“Allāh is great. Who knows what tomorrow might bring. We will altogether watch and see.”

During his speech, he warned the US:

During the civil war in Syria, Turkey has largely avoided direct military confrontation with Assad’s army, despite declaring that Turkey does not envisage the future of Syria with him.

The Syrian regime’s army has dwindled to near non-existence since before the start of the civil war, due to various factors including mass-defections. This led many to believe that the ‘Syrian Arab Army’ was going to be “written off”. [2]

However, since being bolstered by a range of armed militias and Russian support, Assad’s army is said to be re-taking large areas of Syria, amidst accusations of collusion between Assad, YPG and ISIS. [3] [4]

“We warn that the Syrian Air Force is ready to destroy Turkish air targets in the skies of Syria,” Deputy Foreign Minister of Assad’s government Faisal Mekdad said according to the official SANA news agency. [5]

US and Turkey – NATO allies at odds

Turkey has long insisted that YPG is a threat to the national security of Turkey due to its close ties with the PKK terrorist organisation. The US however, considers YPG a “reliable ally” in the “fight against Daesh in Syria”. [6]

US recently admitted the relationship between YPG and PKK, effectively bolstering one listed terrorist organisation against another.