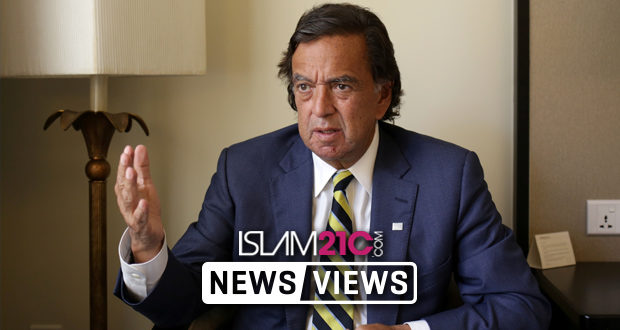 US diplomat quits Rohingya advisory board in protest

Bill Richardson, a US diplomat and long-time friend of Myanmar leader Aung Suu Kyi, has resigned from a panel formed to advise on the Rohingya crisis, where over 700,000 have fled and thousands of others murdered[1] by government forces and Buddhist mobs. The “international” panel was created by Ms Suu Kyi in late 2017, made up of 5 locals and 5 foreign seasoned diplomats, in an attempt to show the world that Myanmar was serious about resolving the ongoing humanitarian crisis. This followed global pressure being applied on Myanmar over what the UN and many other term as genocide[2].

However this move to indicate willingness for resolution appears to have spectacularly backfired with Mr Richardson resigning within weeks, and slamming his decades-long friend. In an interview with Reuters[3], he said “The main reason I am resigning is that this advisory board is a whitewash,” adding he did not want to be part of “a cheerleading squad for the government”.

It is said that Ms Suu Kyi became furious when he raised the issue of two journalists under detention for investigating a mass grave of Rohingya, to the extent that “Her face was quivering, and if she had been a little closer to me, she might have hit me, she was so furious.”[4]

The advisory board’s agenda, Mr. Richardson said in a statement, was “devoid of any meaningful engagement with the local communities in Rakhine, whose people the advisory board is meant to serve.”

Mr. Richardson’s exit severely damages the credibility of the advisory board, which was already under scrutiny given Myanmar’s refusal to allow the UN or international media independent access to Rakhine state.

This episode only further highlights the deep top-down involvement in the genocide; several international figures, from politicians, celebrities, activists to many others, have spoken out against the shocking actions of the Myanmar forces and their supporters.  The so-called champion of democracy and freedom has rarely broken her silence on the genocide, and refers to the crisis as an exaggeration,[5] despite the obvious scale of ongoing injustice.

In the meantime, the suffering continues for thousands of refugees in Cox’s Bazaar, Bangladesh, who face potential forced repatriation[6] following an agreement between Myanmar and Bangladesh. Myanmar is expected to accept 1,500 Rohingya back every week, which commenced 23rd January, and suggests that the rate will increase and all refugees will be returned within 2 years. Both the UN and Amnesty International have expressed their doubts over how safe these returns will be in reality; an obvious concern considering the scale of ethnic cleansing witnessed thus far.

2018-01-27
+Editor
Previous: Turkey warns the US: Get your troops out of Manbij, Syria
Next: 50 Virtues of Masjid al-Aqsa Every Muslim Should Know