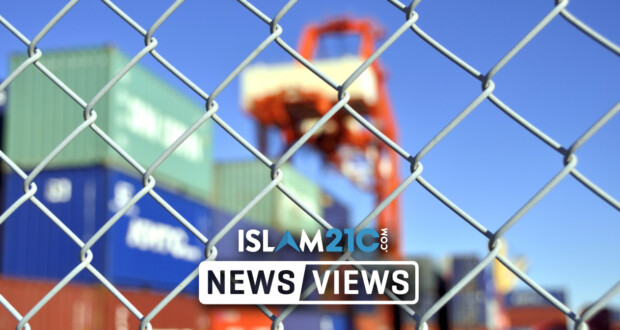 The US government on Wednesday instituted a nation-wide ban on all tomato and cotton products made in China’s western region of Xinjiang, following allegations that the products are made from forced labour by Uyghur Muslims detained in concentration camps.

The Customs and Border Protection (CBP), the agency that monitors the arrival of people and goods in the US, said the ban applies to textiles, apparel, and raw fibres, as well as cotton- and tomato-based products grown in Xinjiang, the region known as East Turkestan by its Muslim inhabitants.

In a statement on its website, the CBP said:

“CBP issued a Withhold Release Order (WRO) against cotton products and tomato products produced in Xinjiang based on information that reasonably indicates the use of detainee or prison labor and situations of forced labor.”[1]

The border agency identified a number of so-called ‘forced labour indicators’ through its investigation. These indicators include debt bondage, restriction of movement, isolation, intimidation, threats, abusive living, poor working conditions, and the withholding of wages.

Following the ban and the issuance of the WRO, the CBP announced it will detain cotton and tomato products produced in the region, as well as other products manufactured in third countries.

The Department of Homeland Security (DHS), of which the CBP is a part of, calculated that an estimated $9bn worth of cotton products and $10m worth of tomato products were imported into the US last year. The DHS said the WRO will send a message to global markets that it will not tolerate slave labour of any kind.

“DHS will not tolerate forced labor of any kind in U.S. supply chains. We will continue to protect the American people and investigate credible allegations of forced labor, we will prevent goods made by forced labor from entering our country, and we demand the Chinese close their camps and stop their human rights violations.” [1]

Under the new directive, border agents at all US ports of entry will be given the power to detain such products. The order is the fourth of its kind that the CBP has issued, and the second in regards to products imported from East Turkestan.

“This ban will redefine how the apparel industry — from Amazon to Nike to Zara — sources its materials and labor”,[2] said Scott Nova, director of the labour rights group Workers Rights Consortium, adding that “any global apparel brand that is not either out of Xinjiang already or plotting a very swift exit is courting legal and reputational disaster.” [2]

The recent measures follow concise actions taken by a coalition of over 190 organisations and rights groups that have been urging major fashions brands and companies to stop buying produce made in Xinjiang, as well as auditing companies to stop working with factories in the region.[3]

The Chinese embassy in Washington DC said the new order was a “political lie concocted by some U.S. politicians”, [3] adding that the US “resorts to pressure, sanctions and other means to suppress Xinjiang enterprises and undercut Xinjiang’s stability, development and prosperity.” [3]

The communist leadership in Beijing has set out to eradicate East Turkestan’s unique Islamic culture traditions. In recent years, draconian and genocidal measures have been set up to separate families and break up communities. Such measures infamously include incarcerating innocent Muslims in modern-day concentration camps.

Detained Uyghur Muslims are forced to renounce their faith, pledge allegiance to the Communist Party, and eat pork.[4] As well as face torture and psychological abuse, the Uyghur detainees are made to work as slaves on newly created pig farms and cotton fields.

The Chinese government has defended its genocidal policies in the region, arguing that they are aimed at tackling extremism and terrorism in the region, a trope routinely used to mask their human rights abuses. [4]

The Chinese government has routinely denied the existence of concentration camps, where up to 1 million Muslims have been detained, [4] despite the overwhelming evidence of their existence. The Chinese government instead says these are re-educational centres aimed at retraining the local population and teach them new skills.